Mix March Madness, Round Two: Ctrl+Alt+Del vs. A Distant Soil! 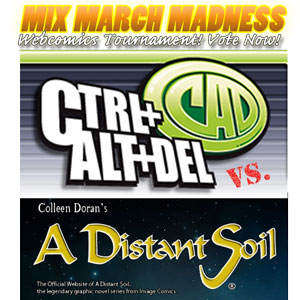 Round 2 of Mix March Madness! Where 64 webcomics come in, but only one comes out! Let’s meet the comics that made it to the second round… ready to duke it out, as only webcomics can!

To my left… running for over eight years, Tim Buckley steals your soul in the small print if you dare read…

But he’s a newcomer compared to the fighter at my right… Colleen Doran and her award winning story, over three decades in the making…

Will Ctrl+Alt+Del interrupt A Distant Soil? Who gets the blue screen of death? Vote now!

Click here to see all the webcomics and their standing in the tournament!