HANCOCK TIPS HIS HAT TO THE SEA GHOST!! 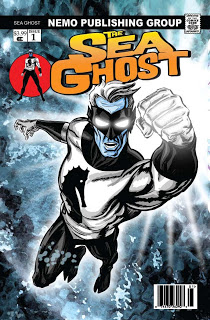 This is my third review in as many days of a Jay Piscopo work.  The previous two reviews had words in them like ‘nostalgic’, ‘cutting edge’, ‘reminds me of Saturday morning cartoons’, etc.  They were both digest sized graphic type novels that read extremely easily and were filled with great, fun stuff.  The third item I’m reviewing from Jay is a straight up comic book spotlighting a character from Piscopo’s CAPT’N ELI universe and opened it expecting a totally different experience than reading the previous two works.

Thankfully for me, I was dead wrong.

THE SEA GHOST is a human given great powers by an undersea race in an effort to save his life.   He fights during World War II as the Sea Raider, but after some tragedy, takes on the role of The Sea Ghost.  He is well established in this role, working with his children as a hero as this comic opens. 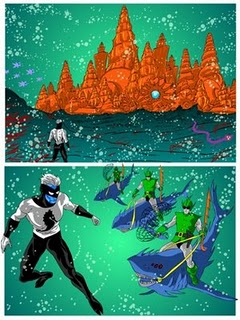 I could get fancy and say all sorts of cool things about how Jay achieved what he wanted to, according to his own piece in the book, about a great homage to characters, especially Space Ghost.  That feel is definitely here.   But I think I’ll simply say that this story is just plain FUN.   I opened it and swore I was looking at a Gold Key comic from when I was a kid.  And that is a COMPLIMENT!  I enjoyed the ‘independent’ comics even then because the styles were so different and experimental.  THE SEA GHOST harkens back to that as well as back to the great Silver Age books where literally anything could happen.  The Sea Ghost can investigate a strange ship and get sucked in and be on another planet and it works! (That happens, by the way).   The focus is definitely on the Ghost in this issue, but there are cool threads and supporting characters that pepper this thing like bullets from a Tommy gun.  I particularly want to see more of a trio of characters who show up toward the end!!

THE SEA GHOST is a rollicking tale that has a ton of stuff in it, but also stays very true to the ‘undersea’ nature of the character as well as evokes comic tales of times past, the ones that were full of wonder and excitement and just had the intention of telling one heckuva tale.

FIVE OUT OF FIVE TIPS OF THE HAT-This one hit with me on all cylinders. 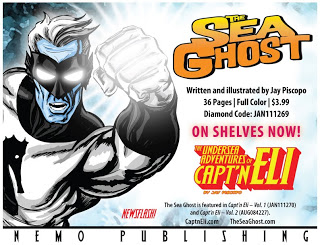