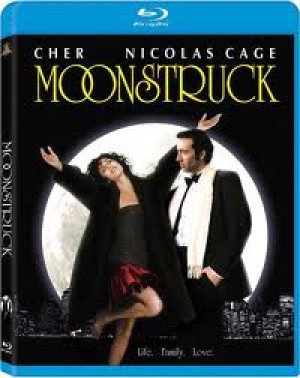 Some movies offer us incredible performances or great stories and then there are those that combine the elements with the right cast telling the right story for the right audience at the right time. That’s movie magic at its purest and can describe the enduring appeal of [[[Moonstruck]]], The 1987 film is finally out on a bare-bones Blu-ray disc courtesy of Twentieth Century Fox Home Entertainment.

Starring Cher at the height of her film popularity, it also featured Nicholas Cage as her lover and we’re reminded once more that this is a man of strong talent, who has chosen a career path that negates stretching himself as a performer. Bulking up for Con Air may have been the worst choice he ever made.

Directed by Norman Jewison, the story is a romantic comedy when the formula still worked. Cher, who won an Oscar as bookkeeper Loretta Castrorini, and her budding relationship with Cage’s younger and winning Ronny Cammareri forms the core of the story. John Patrick Shanley’s screenplay is a valentine to life in Manhattan and Jewison brings it to life with a strong supporting cast including Olympia Dukakis (who also won a Supporting Actress Oscar), Vincent Gardenia, and Danny Aiello. Shot in Brooklyn and around Little Italy, it is as lush to watch as it is fun to listen to. Scenes set at the Metropolitan Opera House give the city is glitz and grandeur.

The bookkeeper has been unlucky at love – and marriage – but wants to try again with Aiello’s unassuming Johnny Cammareri, until she realizes she can’t take her eyes off the younger brother. Her parents disapprove of their daughter’s choices, thinking she was better on her own. As they plan their wedding, things go awry and the estranged brother comes more into focus and his winning ways melts Loretta’s damaged heart. Cher is at first hard to believe as a nerdy accountant unlucky at love but she makes the character feel real and you can believe Gardenia and Dukakis as her Greek Chorus parents.

The acting is strong, led by Cher but also shows how good Cage can be when he wants to. The transfer was well handled so it looks great and sounds good. Extras include the original commentary from Jewison, Shanley, and Cher. Also carried over from the original DVD release is Moonstruck: At the Heart of an Italian Family, a look at the roots of the culture that led to the film.

There’s also the six-part[[[Pastas to Pastries: The Art of Fine Italian Food]]], which offer us looks at restaurants in Little Italy, including Grotta Azzurra (18:47); Italian Food Center (2:31); Ferrara Pastries (2:28); Piemonte Ravioli Co. (2:07); a gelato stand (1:02) and Florio’s Restaurant (1:24). New and fun to have are recipe cards for spadini Romana, bucatini all’Amatriciana and lamb de Elvino. “[[[The Music of Moonstruck]]]” (6:00) minute featurette that covers how important the score was and how a disastrous screening led to the original music being scrapped.