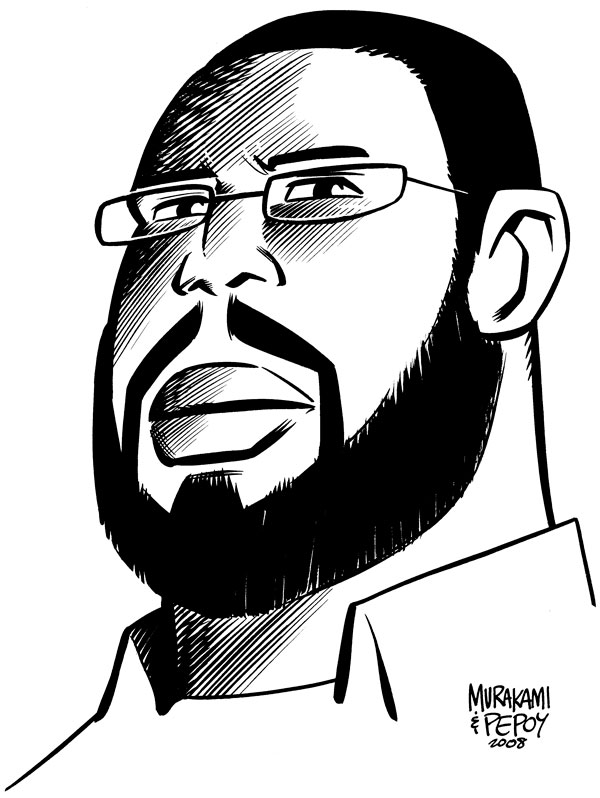 From all corners of the comics internet, the only word to describe the reaction to Dwayne McDuffie’s death has been shock… although dammit is running a very close second. His passing has become a trending topic on Twitter, which only partially shows how far his influence really was.

Andrew Pepoy sent the image above, which he inked over Glen Muramaki’s pencils. Dwayne liked it a lot and used it on his blog and Facebook page, it’s nice to see the original at a decent size.

I will never forget sitting in his office as we worked out storylines. There was more than just his physical presence (he was well over six feet tall). He seemed to radiate confidence in his abilities, which was entirely warranted, and he was determined to roll with whatever curves Cartoon Network might throw his way and turn them into the best stories possible. He had boundless enthusiasm not only for his work, but for the sheer creative process. To say he will be missed is to understate it. I offer condolences not only to his family, but to the entirety of fandom for losing one of the great ones.

he was a great man. he was good friend to me. he was the only person in my life i’d refer to as a mentor. i can’t fucking believe it. i really am not a person right now.

It was never Watchmen or Dark Knight that opened up the possibility of superhero comics for me, but Dwayne McDuffie’s Damage Control, the Marvel series looking at the people who cleared up the physical and legal damage done by superhero actions. It was genuinely witty, self aware and just so well written. At the time I knew it was something special. It remaind one of my favourite comics. And it kept me reading the genre until everyone else could catch up. And he did it again years later over at DC, co-founding Milestone Media, writing Static, Icon and Hardware, books that challenged so many assumptions about character and race, dispelling assumptions of tokenism over ethnic characters in comics by creating rich and multilayered ensemble character books. I just thought the books were really, really cool and I have the longboxes to prove it.

CBR has a number of creator quotes, my favorite is Tom Brevoort:

Dwayne was, without fail, the smartest guy in the room, no matter what room it happened to be. And I’m talking about textbook smarts here — he was extremely well-read, and had the background and education of a scientist. But his real love was in telling stories, not making scientific discoveries, so he moved into comics and animation. And because he felt strongly about the ability of comics to connect with people from all walks of life, and their power to inspire, he co-founded Milestone Media, dedicated to creating a more balanced multi-cultural approach to the question of a super hero universe.

But what may be Dwyane’s greatest legacy comes from Matt Fraction:

An entire generation of kids that know Green Lantern as a strong, heroic, African-American man.