“The secret to Nancy’s success,” the classic story goes, “is that it takes as long to read it as it does to decide not to read it.”

When I heard that gag back in the 1970s, it was attributed to the great artist Wallace Wood. Chillingly, it’s possible it predates Woody’s career by decades. What somehow became synonymous with the bland and the banal started off as the offspring of a cheesecake girlie strip, Fritzi Ritz. It turns out Fritzi had this niece named Nancy who came to live with her. Being a gag strip, I do not believe the details of the demise of the spiky-haired girl’s parents were ever revealed, but it would be uncharitable to assume the spunky, independent girl murdered them in their sleep.

Nancy’s best friend was a Dead End Kids wannabe named Sluggo. Had Nancy shaved off her hair, enjoyed a sex-change operation, and donned a striped t-shirt, she would look exactly like her friend. So perhaps it was Sluggo who did the parents in after uncovering the results of a blood test. 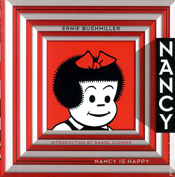 Fritzi and Nancy lived in the nice part of town. Sluggo lived in the slums. For quite a time in the 1930s and, less so, thereafter, clearly what separated those neighborhoods was Wackyland. Had those adventures been published in the hippie era, we would have assumed writer/artist Ernie Bushmiller consumed a prolific quantity of LSD.

In fact, I am surprised a Nancy underground comic wasn’t published during those paisley days. Publisher/cartoonist/freedom fighter Denis Kitchen was, and probably still is, quite a fan of the stuff. He even produced a line of Nancy ties; I once wore the subtle power-tie version to a big-deal executive meeting at Warner Brothers, much to the chagrin of DC Comics publisher Paul Levitz.

Nonetheless, I suspect the secret of Nancy’s success was the decision to “dumb it down” for the general audience, a trick that saved Blondie’s ass during the previous decade. Remember, the only reason the even more surreal Krazy Kat endured throughout the ridiculously powerful Hearst chain was the fact that it was William Randolph Hearst’s favorite feature… and he signed the paychecks.

Despite its homogenization, Bushmiller produced a funny and often clever gag strip. The proof of this lies in the strips produced by others after Ernie died: even recycled old jokes looked pale and pathetic compared to the original. At its dullest moments during the later Bushmiller era, Nancy was sufficiently entertaining to maintain its role in the readers’ daily ritual at a time when comic strips gave subscribing newspapers their competitive edge. You know, back when they actually had to compete with other newspapers.

Fantagraphics Books has released a hefty tome reprinting Nancy’s mid-forties run, fronted by an introduction from Daniel Clowes. Given the feature’s undeserved reputation and the plethora of fine newspaper reprint books, I fear their Nancy Is Happy might get lost in the shuffle.