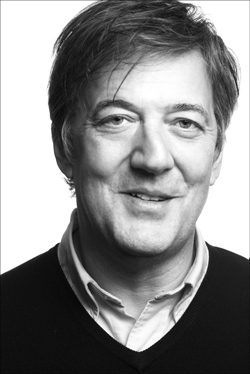 Author, actor, comedian and game show host, Stephen Fry will receive the Annual Outstanding Lifetime Achievement Award in Cultural Humanism, presented at Harvard University each year by the Harvard Secular Society on behalf of the Humanist Chaplaincy at Harvard and the American Humanist Association.  Past recipients of the award include novelist Salman Rushdie, punk rock star Greg Graffin of the band Bad Religion, writer/director Joss Whedon, and Mythbusters Jamie Hyneman and Adam Savage.

ComicMix readers may recognize Fry from such movies as V for Vendetta, Tim Burton’s Alice in Wonderland, and the voice of The Hitchhiker’s Guide To The Galaxy.

The event, scheduled for Tuesday, February 22, 2011 at 8 PM, is sold out and will include a performance by Stephen Fry.  Satiric Musician Molly Lewis was added to the scheduled ceremony at the last minute and will perform her song, “An Open Letter to Stephen Fry.”