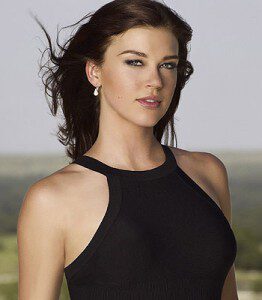 Palicki won the role of Wonder Woman, closely associated with Lynda Carter, who played Diana Prince in the 1970s series, in a decisive manner – she was the only actress invited to test for it.

The Daily Beast got a look at the current draft of the script for the pilot, wherein Wonder Woman/Diana Prince is a vigilante crime fighter and a successful corporate executive and a modern woman trying to have it all. It’s a bit… oh, lordie:

Diana’s first appearance, here in her guise as Wonder Woman, is a Hollywood Boulevard-based action sequence set, cringingly, to the outdated tune of Beyoncé’s “Single Ladies,” the first of many musical cues—including tracks by Lady Gaga and Kanye West—in the script, all of which seem to prove that a) Kelley is a few years behind the times, and b) he watches a lot of Glee, since nearly all of these songs have been covered by the show choir.