GUEST REVIEW OF THE WEEK FROM JOSHUA REYNOLDS!

DAY LATE, DOLLAR SHORT REVIEWS by Joshua Reynolds
DEMON’S NIGHT (JASON DARK, GHOST HUNTER VOL. 1)
Guido Henkel
Thunder Peak Publishing, 2009
www.jasondarkseries.com
BOOK BLURB: A series of bizarre deaths leaves the victims unnaturally desiccated and decaying, sending Jason Dark into the dangerous world of the London dockyards in search of a supernatural murderer. But is the paranormal investigator prepared to duel a full-fledged demon on a Hell-bent mission to create chaos and catastrophe throughout the earth, a fiend determined to wreak more death and destruction than his even more ominous Master? 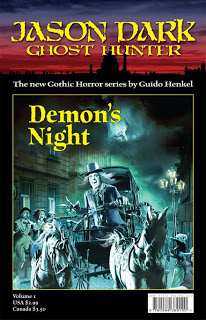 I love a good occult detective story. There’s something about intrepid investigator battling horrors from beyond space and time that really perks my interest as a reader.  I dig characters like Doctor Orient, Inspector Legrasse, Thomas Carnacki…and Jason Dark.
Demon’s Night, the first volume in Guido Henkel’s JASON DARK: GHOSTHUNTER series is a thrilling introduction to the eponymous protagonist, the newest name on the roster of occult detectives. Dark, a scholar as well as a man of action, is very much in the tradition of the old-school Victorian ghost-breaker, facing his supernatural opponents with both an esoteric knowledge and a ready fist.
Henkel goes to great lengths to establish Dark’s personality right off the bat, doing his best to give the reader a fully-fleshed out hero in just a few pages. With hints of Sherlock Holmes and a bit of James Bond, Dark is by turns callous and comforting, his mind on the mystery before him even as he belatedly attempts to comfort a victim of the titular demon’s attack.
Said victim, Siu Lin, is an interesting character in her own right-a Kato to Dark’s Green Hornet (in more ways than one…Dark’s a fair pugilist, but Siu Lin goes toe-to-toe with a demon without blinking, and without a weapon! Now that’s a heroine!), and her transformation from victim to demon-hunter is handled believably, if a tad swiftly.
That’s not a complaint, mind-like any good pulp story, Demon’s Night moves at a fast clip, and Henkel is adept at crafting a taut action sequence, delivering carriage chases and back-alley brawls with cinematic fervour.  Too, Henkel takes care in crafting his world, tossing off directions and regional nods Lester Dent-fashion in order to deliver a fully-developed world for his protagonist to adventure in.
The story itself is a straight up Gothic mystery, with creepy graveyards and opium dens galore. The characters bounce from one horrific discovery to the next as they try and pierce the veil of secrecy that surrounds the demonic predations, with Dark spitting facts about the Court Infernal the entire time, even as he and Siu Lin begin to create a working dynamic they will keep to in future instalments in the series.  Over it all, however, is the mystery itself-What is the demon after? What-or who-is it hunting? And what does it intend to do when it’s found them?
The answer will leave you breathless for the sequel. Luckily, that sequel (as well as the next seven stories in the series!) is now available via www.jasondarkseries.com. You can read them free online, or purchase them in electronic or print format.  The print version retails for $2.99 USD.
Share