THE LEAGUE OF EXTRAORDINARY GENTLEMEN 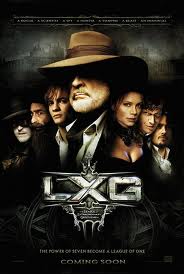 The concept of THE LEAGUE OF EXTRAORDINARY GENTLEMEN is so simple that I’m honestly surprised nobody before Alan Moore thought of it. Here it is in a nutshell: From time to time many of the great fictional heroes (and sometimes villains) of the past and present have found it necessary to come together to form an alliance against evil so overwhelming that it threatens to conquer or destroy the world. They do so under the authority of a special Branch of The British Secret Service, under the direction of a mysterious figure known only as M. This alliance is known as The League of Extraordinary Gentlemen. It is rumored that members of Leagues past and present have included Dr. Syn, Sherlock Holmes, Captain Blood, Lemuel Gulliver, Robin Hood, Tarzan, Doc Savage, The Shadow, James Bond, and many, many others. But for the purposes of this review we’re going to look at a particularly unique grouping of The League, one led by the world famous adventurer Allan Quatermain (Sean Connery)

Allan Quatermain is an old man, living in Africa, drinking his days away and only wanting to be left alone. However, events in the rest of the world bring him back into action. A mysterious man known only as The Phantom is threatening the governments of the world into a global confrontation and there is seemingly no way to stop him since he has advanced weapons such as automatic weapons, body armor and tanks. Quatermain is brought to London where he is introduced to M (Richard Roxburg), The current head of the British Secret Service who informs Quatermain that he has been chosen to lead the newest incarnation of The League Of Extraordinary Gentlemen whose membership includes Captain Nemo (Naseeruddin Shah), The Invisible Man (Tony Curran) and Mina Harker (Peta Wilson) who has the benefit of vampiric powers due to he relationship with an infamous Transylvanian count. Quatermain and his team quickly acquire the grown up Tom Sawyer (Shane West) who is now an agent of The United States Secret Service. Dr. Henry Jekyll (Jason Flemyng) and his monstrous alter ego Mr. Hyde as well as the immortal Dorian Gray (Stuart Townsend) also join up and they’re all off an adventure that takes them all over the world from London to Paris to Venice to a final confrontation at the top of the world in the frozen Artic where the secrets of The Phantom are revealed and the destiny of a new century will be decided as The League Of Extraordinary Gentlemen make their final stand.

You’re going to have a lot of comic book fans that will tell you not to see THE LEAGUE OF EXTRAORDINARY GENTLEMEN as they feel that the movie bastardized Alan Moore’s concept. I’ve given the trade paperback of the comic to several people whose opinions I trust and they have told me that while they like the comic and appreciate it for what it is they wouldn’t have gone to see a movie that was strictly based on the comic book. However, those people have also said that the greatly enjoyed the movie version and I think that’s because the movie version does exactly what it’s supposed to do: provide us with two hours of thrills, adventure and excitement. Yeah, yeah, yeah, it’s not the comic books but it is a great piece of outsized, overblown, pulp action/adventure taken to the extreme and part of the reason I had so much fun watching the movie was that I could see the directors, actors and special effects guys just saying “the hell with it” and allowing themselves the room to have fun with the concept and just working with the material they were given and making sure they delivered.

THE LEAGUE OF EXTRAORDINARY GENTLEMEN is a movie I loan out to friends and family often when they ask me what’s a good Saturday night movie. First off, you’ve got Sean Connery who’s simply great. When he made this movie he was 75 years old and he’s the only 75-year-old actor in the world who can get away with beating the snot out of actors half his age and look totally convincing doing it. Other actors look embarrassingly silly in their older years trying to do action scenes but somehow Connery can still pull it off and look convincing. There’s a bunch of great scenes he has with Shane West’s Tom Sawyer where the characters obviously build a father/son type of relationship, especially in the scenes where Allan Quatermain and Tom Sawyer are chasing down Mr. Hyde across the rooftops of Paris and a later scene aboard Captain Nemo’s Nautilus where Quatermain teaches Tom how to shoot. Peta Wilson is terrific as Mina Harker who shows a delightfully dark side to her character and I really liked how Naseeruddin Shah played Captain Nemo. As far as I know this the first time the character of Captain Nemo has been played racially correct in a movie and he supplies the team with their technological/transport support. And his fight scenes are among the best in the movie as he gives Captain Nemo a distinctive martial arts style. He plays Captain Nemo in a way unlike any other actor that’s ever played before and I think he’s probably the only actor who might have read the graphic novel the movie was based on. There’s a certain way he carries himself and the way he says his lines that make you sit up straighter and pay attention and his fight scenes are among the best in the movie. Listen to how he says: “Behold Nautilus…The Sword of The Ocean” and tell me that ain’t downright cool.

That’s not to say that the movie is without its flaws. I really didn’t like how the CGI guys went nuts on the effects. Especially when it came to Mr. Hyde and The Nautilus. In this movie, Dr. Jekyll and Mr. Hyde are more like the Marvel Comics version of Dr. Bruce Banner and The Hulk than the Robert Louis Stevenson original. And Captain Nemo’s Nautilus is huger, bigger and more technologically advanced than any modern day aircraft carrier. And the scenes in Venice make absolutely no sense whatsoever. There’s a whole lot of yelling and chasing around and fighting and shooting but when it’s all over you’re wondering: “What was that all about?” Not to mention that there’s absolutely no mollyfoggin’ way something as big as The Nautilus could navigate the canals.
But there are a lot of little nice touches. The obvious one is where Quatermain is receiving his assignment to assemble The League from M. And if you don’t appreciate the humor of Sean Connery once again getting orders from M then you really need to go back to Basic Film School. And pay attention to the scene between M and Quatermain because in the background are huge portraits of former Leagues. I also liked how Captain Nemo’s First Mate has a running joke in the movie where he has to keep introducing himself: “Call me Ishmael” 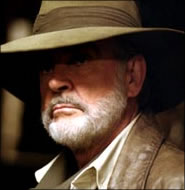 There’s some incredible fight sequences and plot twists that I honestly didn’t see coming and even though I felt the final fight between Mr. Hyde and The Phantom’s main big bad who has ingested a near lethal dose of the Hyde formula was yet another reason for the CGI boys to go wild I liked the relationship between Mr. Hyde and Captain Nemo as they struggled to find a way to defeat their foe as well as the ending scenes between Allan Quatermain and Tom Sawyer.
So should you see THE LEAGUE OF EXTRAORDINARY GENTLEMEN? I see no reason why you shouldn’t. Don’t listen to your comic book reading friends who’ll tell you that it’s nothing like the comic book. Of course it isn’t like the comic book. It’s a movie and a pretty damn good entertaining one. Go ahead and watch it and have fun for what it is: it’s purely pulp action/adventure designed to get you interested in reading the source materials and characters it’s based on. No more and no less. But that doesn’t mean you can’t have a good time watching THE LEAGUE OF EXTRAORDINARY GENTLEMEN before you read the material it’s based on.
110 minutes
Rated PG-13