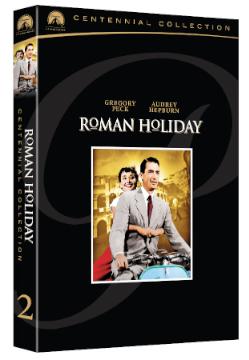 When it opened, Roman Holiday

enchanted a world that had largely never really seen Italy.  The film was one of the first filmed entirely on a foreign location and it became as much a travelogue to a post-World War II America as it was a fresh romantic tale about a princess and a commoner. The second film in Paramount Home Video’s Centennial Collection, it has been cleaned up and remastered, looking sharper and richer than previous editions.

The film introduced the world to Audrey Hepburn, the fresh-faced gamine who became an instant star and fashion trend-setter. Paired with the relaxed Gregory Peck, they made an engaging couple as the two spent a full day seeing the sights.  She’s Princess Ann, in Rome as part of a European tour and tired of her over-scheduled, protected life.  When she escapes for a day off, she strikes up a friendship with American journalist Joe Bradley (Peck).  They go off to explore the city, opening his eyes to a less cynical world as she sees the real people of the city.  They’re tailed by Eddie Albert in a beatnik beard, who’s playing a cameraman smelling a scoop.  It’s poignant, funny, romantic, and a delight that has held up through the years, thanks to a sharp script from Dalton Trumbo.

Trumbo was one of the celebrated screenwriters pilloried during the Congressional witch hunt seeking Communists throughout Hollywood.  His credit was withheld from the film for fifty years but it proudly restored here and his heroism is recounted in [[[Dalton Trumbo: From A-List to Blacklist]]], one of the all new features.  Interesting, most of the extras from the 2002 disc are gone with the exception of Restoring [[[Roman Holiday]]] which is a fascinating look at the process.

Being Hepburn’s debut, she is spotlighted in the thirty minute career piece, [[[Audrey Hepburn: The Paramount Years]]], followed by [[[Remembering Audrey]]], which looks at her affect on the world and her charitable efforts.

Behind the Gates: Costumes is part of the series’ look at the filmmaking process and spotlights legendary costumer Edith Head although we have a look at random clothes from various films that have been carefully preserved.  We also get Paramount in the ‘50s once more which practically is an ad for future titles in this welcome series.

You get a look at Rome at a time when the war debris had been cleaned up and the city hadn’t been filled to the brim with tourists and cars. The antics are innocent and the characters a little thin but certainly enjoyable.  The film holds up and is well celebrated here.