Are You Ready for Torahg the Warrior: Sword of Vengeance? 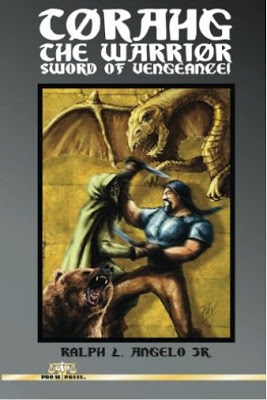 A leader in New Pulp and Genre Fiction, Pro Se Productions announces the debut of a New Pulp Character cast in the grand tradition of sword and sorcery classics! From Author Ralph L. Angelo, Jr. comes TORAHG THE WARRIOR: SWORD OF VENGEANCE!

“Journey with me,” Angelo states, “back to a time unheard of, a land of myth, monsters and magic where a steel muscled warrior must battle against an entire nation to avenge the wrongs done to him as well as to avenge his father’s death! Without a doubt my favorite creation so far, Torahg is destined to take his place alongside classic heroes such as Conan, Tarzan, Kull, John Carter and many more.”

An honored prince stands first in line for the throne of his father, the most powerful King in the world. Young and unaware that the world he knows, his very birthright is about to be snatched from him by murder. In one fateful day, his own brother, in league with a malevolent sorcerer, kills the king. And The Prince, the rightful heir to the kingdom, becomes a wanted fugitive, forced to abandon his life, to exile himself seemingly forever.

Twenty years later, the fugitive returns, no longer the kind hearted youth who watched his father murdered before his very eyes. He walks with the confidence and scars of a hardened warrior, a veteran of many campaigns, and a trained fighter in many forms of combat. With a heart hardened by twenty years as an outlaw across the world, Destiny calls again, driving him to return to the land of his birth. No longer the Heir to the throne, he is instead a man with only one mission. He is TORAHG THE WARRIOR: SWORD OF VENGEANCE!

“TORAHG,” says Tommy Hancock, Editor in Chief and Partner in Pro Se, “is exciting for Pro Se on a couple of levels. First, Ralph’s novel is a great addition to the Pulp fantasy we’ve become known for thanks to Nancy Hansen’s work and it comes from a different angle as well. Also, though, Ralph’s narrative style and presentation overall is unique amongst what Pro Se offers. The story takes the reader and puts them in the flow of the tale actively and allows them to vicariously stand alongside Torahg as he fights his way through his home and his own history.”

Ralph L. Angelo, Jr. is an author who has written for many major motorcycle magazines as well as having written a ‘how to’ instructional book on motorcycling entitled “Help! They’re All Out to Get Me! The Motorcyclists Guide to Surviving the Everyday World.’

His first novel ’Redemption of the Sorcerer’ was recently released. Since then he has written several more novels, including TORAHG for Pro Se as well as the forthcoming Sci-Fi adventure novel ‘The Cagliostro Chronicles’ amongst others.

A young fugitive prince fled the land. Now he returns and he will be forever remembered as TORAHG THE WARRIOR: SWORD OF VENGEANCE! Written by Ralph L. Angelo, Jr., Edited by Nancy Hansen, Cover art by Terry Pavlet, Design and Print Formatting by Sean Ali, Ebook Formatting by Russ Anderson! Fight alongside TORAHG THE WARRIOR in his debut adventure from Pro Se Productions!

This New Pulp Sword and Sorcery tale is also available as an Ebook for only $2.99 for your Kindle, on the Nook, and in nearly all available formats at Smashwords.

For more on Pro Se, go to www.prose-press.com