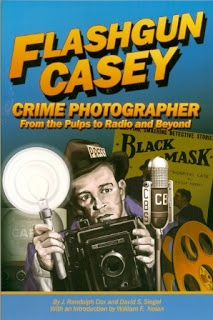 Flashgun Casey, Crime Photographer
From the Pulps to Radio and Beyond By J. Randolph Cox and David S. Siegel
Softcover, 205 pages, 2005

All there is to know about the crime fighting hero created by the award winning mystery writer George Harmon Coxe — from his debut in the 1930’s Black Mask pulp magazine to his 10 year stint on radio, his short lived television career plus his exploits in the movies, novels, comic books and a play.
The only book that gives you an in-depth look at Flashgun Casey in his many incarnations.

Learn the real story behind the why, when and how the famous Blue Note Cafe came to be.

Discover how the gruff, quick tempered Casey of Black Mask days evolved into a younger, more gentle Casey on radio and eventually a well dressed man with romantic inclinations when he made his transition to television.

The fact-filled book includesthe history of Ethelbert, the bartender and Ann, the loyal sidekick. (They weren’t in all of Casey’s many media appearances.)

Included in this volume are-

Synopses of ALL 21 short stories and novelettes, 6 novels, 4 comic books, 2 films and a play 2 uncirculated radio scripts Complete Program Log for radio series: 431 programs, 1943-1950, 1954-1955 Complete Program Log for television series: 62 programs, 1945, 1951-1952 31 photographs and illustrations, including cast photographs for radio and television series First-ever literary biography of George Harmon Coxe, twice President of the Mystery Writers of America and recipient of the MWA Grand Master Award in recognition of his lifetime contribution to the mystery genre and the consistently high quality of his work. PLUS an Introduction by noted mystery critic, William F. Nolan

“Well-written and researched and highly informative. . . If you are a fan of this popular radio series and/or would like to learn more about the various incarnations of this character, this book is for you. (Stewart Wright, Radio Historian.)
“A comprehensive, first-rate history of the sleuthing shutterbug. . . Casey fans will find this handsome volume chock full with valuable information.” (Ed Hulse, Editor Blood and Thunder pulp magazine.)

“This book snaps us back to a time before many of us were born, to the golden age of pulp crime fiction when Chandler and Gardner and Woolrich rode tall in their sadles . . . Both Coxe and Casey are long gone but their books brings them back, as fresh as ever.” (Francis M. Nevins, noted mystery writer and critic)

“This is a great book that follow the career of Flashghun Casey for over two decades. The main emphasis is on the radio years, which is o.k. with me. Siegel is a meticulous researcher.” ( J. David Goldin, “The Man Who Saved Radio” )

“This is no mere snapshot of Casey, Crime Photographer but a richly detailed portrait that secures the program’s rightful place in radio’s history.” ( Dick Bertel, host of WTIC’s Golden Age of Radio broadcast)