David Tennant and Catherine Tate Reunite in ‘Much Ado About Nothing’ 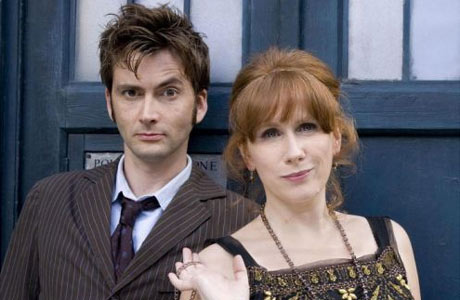 David Tennant and Catherine Tate are set to star in a new West End production of Shakespeare’s Much Ado About Nothing, beginning performances at Wyndham’s Theatre May 16, prior to an official opening June 1, for a run lasting through September 3.
Tennant, who will play Benedick, was last seen on the London stage in the title role of the Royal Shakespeare Company’s production of Hamlet, opposite Sir Patrick Stewart. (Man, it’s still weird typing “Sir” in front of his name.)

Tennant is best known for his time on “Doctor Who”, but his extensive prior stage credits include seasons with the RSC, for whom he has appeared in As You Like It, The Comedy of Errors, Romeo and Juliet, A Midsummer Night’s Dream and Love’s Labour’s Lost in addition to Hamlet.

Catherine Tate, who will be playing Beatrice, can currently be seen in Alan Ayckbourn’s Season’s Greetings at the National Theatre. Her own TV sketch show “The Catherine Tate Show” has had three successful seasons on the BBC, and she has previously appeared opposite Tennant as the Doctor’s companion Donna Noble in the fourth series of “Doctor Who”.