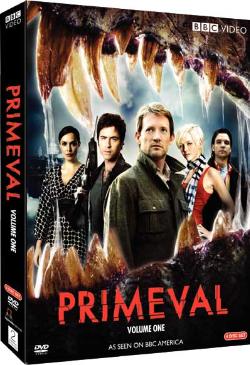 The BBC reserves its Saturday night prime time slots for genre-bending fare and it’s where shows vie for a place.  [[[Primeval]]] is one of the newer series to occupy the coveted slot on ITV and recently completed its run on BBC America.  Today, Warner Home Video collects the first 13 episodes, comprising its first two seasons, as [[[Primeval Volume One]]], which will have to tide us over until season three kicks off next year.

Totally unrelated to [[[Doctor Who]]] or other SF series, the show seems to owe more [[[Jurassic Park]]] than anything.  We’re in a world where spatial anomalies randomly open (throughout only England it seems) and objects animal, vegetable or mineral can cross through.

On the one hand, it’s a paleontologist’s dream, on the other hand it’s also a nightmare as long extinct predators arrive seeking dinner. A group of individuals, responding to what appears to the first such rift in space/time find themselves forming as a team, working for the British government to understand the rift and keep humanity from harm.

Over the course of the six episode first season, which ran late last year, we also discover that the wife of Nick Cutter (Douglas Henshall) went missing eight years ago and apparently went through an earlier rift.  Very quickly, we discover there’s a lot more to her and the rift than originally imagined and suddenly we have threads to tie the episodes together in an overall arc.

Cutter, who teaches evolutionary zoologist at university, is joined by in the adventure by his colleague Stephen Hart (James Murray), who just happened to have an affair with the missing Helen (Juliet Aubrey) which makes things just a wee bit tense.  Grad student and overly enthusiastic Connor Temple (Andrew-Lee Potts) brings a geeky charm to the team which is rounded out by reptile expert Abby Maitland (Hannah Spearritt). When the government figures out these guys are the answer to an unforeseen problem, they assign overly officious Sir James Peregrine Lester (Ben Miller) to run the operation, handing the grunt work over to Claudia Brown (Lucy Brown). Sparks fly between her and Cutter as they do for Abby and Connor.

While each episode is self-contained, we discover the threats both here and to the past.  This is shown in exceedingly dramatic effect at the end of season one as Helen does something in the past that changes the future, eradicating Claudia from the timeline. As season two opens, the government has figured out the team needs a proper HQ and they start working out of the A.R.C. building which is one of the niftier set designs I’ve seen since Alias. We then meet Jenny Lewis, a PR flak to help convince the public they really aren’t seeing dinosaurs.  She happens to look just like Claudia which sets Cutter’s heart a pitter pattering.

The stories range from outright terrifying to mildly amusing.  The anomalies open between today and various tomorrows so we’re getting glimpses from different parts of the world’s evolution. A great example of that is episode 8, as worm-like creatures and their toxic atmosphere find their way into a London high rise office building.

Overall, the show looks great and is well acted.  It helps that most of the episodes have been written and directed by a small team of people so there’s a consistency to look and performance which keeps the show comfortable.  The action quotient was upped in the second season so things move along more quickly which is as it should be now that we’ve learned the premise and gotten to know the characters.

And yet…the show is entertaining but not as compelling as Doctor Who or Torchwood.  The humor is a little on the juvenile end and Helen’s evil plans just aren’t feeling very dangerous yet.  The characters and relationships feel as if they were scaled for all ages and the threats, while interesting, don’t threaten humanity or the cosmos on the same scale.

The DVD is nicely packaged and has some episodic commentary plus two documentaries on the making of the show, each produced to air at the end of each season.  The latter, “Through the Anomaly”, includes neat bits on how the actors become models to their action figures and the process toy designers currently use.