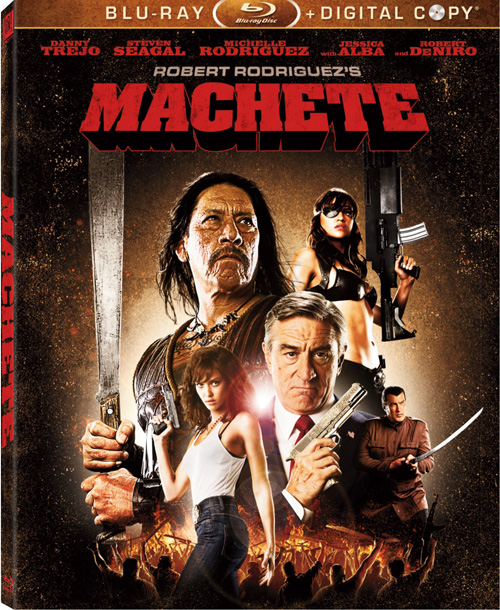 Movies and television shows have been created after something has caught the public’s imaginations be it a Twitter feed, a commercial, or a persona. Perhaps the best of the lot, though, is [[[Machete]]], inspired by a fake movie trailer. The film, now out on DVD from 20th Century Fox Home Entertainment, came about when director Robert Rodríguez fashioned a B-film trailer as part of [[[Grindhouse]]], the homage to trashy films of the past, made with Quentin Tarantino. Machete, with Danny Trejo in the lead, captured imaginations so Rodriguez and his brother Alvaro wrote a film to do the trailer justice.

I cannot tell you the last time I saw such an entertaining B film, which made me laugh out loud more than once. The thing is, beyond the gratuitous nudity and over-the-top violence, the film actually addresses a few of the day’s hot button issues giving it more heft than the films it emulates.

Once a Federale in Mexico, Machete watched his wife be killed by a drug lord (Steven Segal) and was left for dead. Three years later, he resurfaces in Texas as a day laborer just trying to get along. As luck would have it, corrupt political operative Jeff Fahey hires him to assassinate Senator Robert DeNiro. Before he can fire, though, someone else shoots the senator and frames Machete, igniting racial tensions throughout the city. At the same time, an independent militia, led by Don Johnson, is in cahoots with the senator and both want to shut down an operation called The Network, which has been helping illegals cross the border and begin a new life. It’s led by one woman, Michelle Rodriguez, and is hunted by another, ICE officer Jessica Alba. The rest of the movie is filled with action and mayhem with a script that barely holds the threads together but has more gaping holes than the border between countries.

Alba looks great and handles her official role well but does so without the requisite gravitas. Rodriguez, though, shines and has never looked hotter, especially during the climactic action sequence. Still, the film is all Trejo’s and he does it with a grim faced countenance that shows he’s taking no joy in doing his job or enacting long-awaited vengeance.

The rest of the cast generally is playing against type and most don’t have a chance to play anything but two-dimension figures but boy are they having fun. Noteworthy is how understated Cheech Marin is as Trejo’s brother and how welcome it was to see FX makeup genius Tom Savini on screen again (although a quick glance at IMDB shows me how many films of his I’ve missed). Lindsay Lohan is here as Fahey’s daughter and she looks fabulous in everything from a nun’s habit to her birthday suit but her character is so poorly written that she has nothing to play and comes across more clueless than calculated.

There’s plenty of blood as Machete fights his way in and out of trouble but there’s one time when he escapes from a hospital that has him use the most imaginative device I’ve seen in years. It’s also been a while since a film was just so pure entertaining and a great way to pass a cold winter’s night.

The Blu-ray transfer looks and sounds just fine. The film comes with a small number of extras but most missed is a commentary track from Rodriguez. We do get the green and red-band trailers, 10 minutes of deleted scenes, and an audience reaction track that is fun but unnecessary. Interestingly, an entirely Alba-centric sub-plot has been excised from the film but preserved through these deletions and you understand why the thread was removed.

The film ends with a promise of Machete returning for two sequels and trust me, I’ll be among the first to line up to see them.