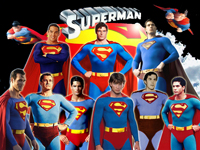 I’ve seen a lot of dissatisfaction online with Joe Straczynski’s Superman storyline, the one where he ambles across the nation. Well, that’s show business; I rather like it, at least thus far. I think if JMS were to have done this story as a
graphic novel, say around 120 pages, it would have gone over better with the
bloggers. The basic idea worked for Thornton Wilder in his play Our Town, and taking this energy into
the superhero myth is a clever idea. But watching it unfold in monthly
installments – with fill-ins – does not do this concept justice.

However, Joe’s story reveals the major, overwhelming problem with today’s mainstream comics. It simply takes too damn long to tell a story.

Whereas I enjoyed Brian Bendis and Mark Bagley’s Ultimate Spider-Man, it’s convenient for me to point out that the initial origin story only took Stan Lee and Steve Ditko 11 pages to pull off and Brian and Mark took five full issues. Different times, different storytelling techniques, but still we’re talking about a ten-fold increase in story length.

For me, this makes most “Big Event” stunts unreadable. I liked Marvel’s Shadowland, but my interest waned with each successive tie-in and mini-series. Same thing with Marvel’s Civil War / Dark Reign stunt, only multiplied by Warp Factor Four.

DC iced me with their Crisis on Infinite Final Crises event. What did they publish, about four thousand issues there? As for Brightest Day, I got burned out early on during Blackest Night so I never sampled the sequel. I don’t know who these characters are; DC keeps on changing its mind with each Big Event.

Yes, I understand – these Big Events do “quite well” in the marketplace. I respond, “Oh yeah? Compared to what?” Big-name comics publishers with big-name characters with big-time movie support are selling only to a small circle of friends in numbers so inadequate that 1960s Marvel publisher Martin Goodman and 1960s DC publisher Irwin Donenfeld would drop dead at the sales reports, if they weren’t dead already. Several years ago, I told Donenfeld – whose office was about a mile from my house – what Superman was selling, and he refused to believe it. “It’s Superman!” he said, shaking his head.

The sad fact is, the American comic book medium is no longer a mass medium. Nor is the rest of the publishing world. Readers are part of an ever-shrinking elite.

Will the Internet change that? Maybe. Will tablet computers with auto-subscriptions change that? I sure hope so. Otherwise, we’re in the buggy whip business.

There’s a lot of exciting stuff going on in comics today.
There’s a lot of solid writing from publishers both mainstream and otherwise.
Some great art, although with so many titles the great stuff is buried beneath
a ton of crap. There’s some wonderful concepts and some illuminating, even
inspirational stories. Sadly, very little of that is coming from the two
publishers who dominate what little market we’ve got left; the so-called
independent publishers (traditionally defined as “not Marvel or DC”) have
limited promotional resources, and direct sales comics shops can’t afford to
take much of a risk. They’ve got to order the Big Events, and as these stunts
get even bigger and segue directly into other Big Events, retailers have very
little money left over to take a chance on these independents.

That’s a shame. I go to conventions and I see more hopeful
wannabes than ever. I see more new kids with real talent, proportionately
speaking, than ever before. The interesting stuff that goes on at the larger
conventions isn’t at the major publishers’ showbooths, it’s in Artists Alley
and people you have never heard of are producing it.

So I gaze at the rapidly encroaching new year and I hope. I’d rather read good comic books, but at least I have hope.