GUEST REVIEW OF THE WEEK! 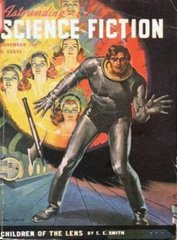 From the November and December 1947 issues of ASTOUNDING SCIENCE FICTION, this was the final book in the original Lensman series (Smith later revised TRIPLANETARY to serve as a prologue and wrote FIRST LENSMAN to fill in the gap between TRIPLANETARY and GALACTIC PATROL). CHILDREN OF THE LENS certainly has a full cast, with both Kimball and Clarrissa Kinnison, their five offspring and familiar faces (if “faces” is the correct word) like Worsel, Tregonsee and Nadreck… not to mention Mentor of Arisia. Our heroes are united in action to combat the biggest threat to Civilization yet, all building up to a cosmic showdown two billion years in the making.

Yet for most of the time, I didn’t find CHILDREN OF THE LENS quite as satisfying as the earlier books in the series. Smith’s writing has gotten much smoother and less flamboyant than when he started, but some of the purple grandeur has been lost. Also, to be honest, too much of the conflict this time around is on a telepathic level. Powerful superhuman minds probing and clashing is dramatic enough, but the earlier books capped off the psychic struggles with epic scenes of planets crashing into each other and the output of suns concentrated into destructive beans.

The big ultimate showdown is impressive enough (and actually I don’t see how it could have ended any other way), but I thought the middle of the story could have used some more exploding planets and ultra-resonating frammistats. Kimball Kinnison’s undercover missions (posing as a smuggler or crook) were always highlights of the first three books and here they gets skipped over briefly. (Smith’s infrequent dry humor shows where Kim is posing as a snoopy author.)

There is a haunting moment when, with all the minds of untold millions of Lensmen combined, the five Children have joined into a group-consciousness called the UNIT to spearhead the attack. “Strong young arms laced the straining Five into a group as motionless and as sculpturesque as statuary, while between their bodies and around them came into being a gigantic Lens: a Lens whose splendor filled the entire room with radiance.” I love that image; if the Lensmen books are ever filmed properly, that scene would raise goose bumps.

I felt slightly dismayed at the way the Children so easily and presumptuously manipulate the minds of everyone around them. After cheering for Kim, Clarrissa and Worsel through their adventures in the three preceding books, it was a wee bit unsettling to watch them being toyed with like marionettes by the kids (and without their even knowing about it). I know a major part of Smith’s theme was developing and increasing our heroes’ abilities and that Mr and Mrs Kinnison wanted their Children to keep stepping up in power, inevitably leaving themselves in the dust… but somehow this made me unreasonably sad. It would be like seeing Sherlock Holmes train an apprentice who then secretly plants clues to make it easier for the Great Detective or if Korak had been slyly protecting Tarzan from danger without getting caught.

It’s been twenty years since the last installment. Kim and Clarrissa Kinnison (the Gray Lensman and the Red) have turned out a son (Christopher or Kit) and two pairs of non-identical twin girls. These all have names starting with a “K” sound, and (although each has slightly different abilities and personalities) the girls really all look and sound pretty much alike; enough so, that I wasn’t sure which one was teaming up with Worsel and which with Tregonsee. All five of the Children start off already gifted beyond their parents — they are after all the culmination of the millenia-long breeding program which produced parents Kim and Chris — and additionally they were raised by two Second Stage Lensmen and pals like Worsel and Tregonsee. In fact, these kids are so advanced they can materialize the amazing Lenses on their arms all by themselves. Not that they need one. But they each also head to Arisia to receive their final upgrades from Mentor himself (itself? theirselves?). By this time, the five Children seem like they could take over Olympus itself without much trouble and tackle Asgard a few minutes later.

It’s hard to keep coming up with challenges fit for these steadily evolving superhumans, but Smith always manages. For one thing, they go up against alien beings who can meet them head on; also, much of the action is carried out through technology, as weapons and defenses keep outdoing each other. Too, they have to deal with problems like their nasty counterparts, the Black Lensmen, who get their yellow power rings from the anti-matter universe of Qward… no, wait. Who get their substandard cheap imitation Lenses from somewhere to be identified.

I’m still not sure I’ve got the big picture right, as Smith has created a mythology as dense and complex as Tolkien’s. So I might be perplexed about something on page 221 of SECOND STAGE LENSMEN that is clarified in the introduction to TRIPLANETARY. (My Visualization of the Cosmic All is clouded and weak; in fact, I have trouble finding my car keys.) Be that as it may, it seems that the ultimate evil (from our viewpoint) in the universe are the Eddorians, who operate through a hierarchy of races descending below them in both power and wickedness. As we follow the books, our heroes keep overcoming their enemies only to later find that there was something behind them even worse. (Frustrating, eh?) So the villains escalate from the Boskonian pirates to the Overlords of Delgon to the Eich to the Ploorans (brrrr). Although we the readers know about the Eddorians, in the narrative itself only the Children and the Arisians are hip to their existence.

There are some tantalizing hints here and there that the five Children will soon start breeding with each other in a big incestuous commune. Actually, there are also some unsavory undertones in the scene where Kit initiates his mother in the mysteries of becoming a Second-Stage Lensman; aside from the way he keeps telling how gorgeous and sexy she is, the description of their intense training session sure suggests science-fiction MILFism to me. (“Kit came [telepathically, that is,]; and at the first terrific surge of his mind within hers the Red Lensman caught her breath, stiffened in every muscle and all but screamed in agony.”) After she has been raised to Second Stage Lenshood, her face is white and sweaty and her hair dishevelled. While she goes to freshen up, Kit eats a steak.

Anyway, back to the girls. None of the four sisters “had ever shown or felt the slightest interest in any one of numerous boys and men.” No normal human male, even a Lensman, could possibly come up to their standards. Except, of course, for their brother Kit, who is their equal and who can join with them in a thrilling group mind called the UNIT. Hmm, you don’t suppose…? (“They each had dreamed of a man who would be her own equal, physically and mentally, but it had not yet occurred to any of them that one such man already existed.”) And Kit has funny stirrings about his sisters, too (“They didn’t FEEL like other girls. After dancing with one of them, other girls felt like robots made out putty. Their flesh was different. It was firmer, finer, infinitely more responsive.”)

In the epilogue to CHILDREN OF THE LENS, Kit informs whatever race discovers his time-capsule message that his own Civilization has probably fallen by now and his reader’s new society is being threatened by some arch-threat of its own. But, Kit reassures them, help will be available. (“Prepare your mind for contact.”) And the cycle will start all over again. I can’t even imagine what Smith would have come up with for a challenge bigger and nastier than the Eddorians. Tackling Yog-Sothoth and the Great Old Ones? One of the five Children going bad and turning on the others? Blackie DuQuesne making a comeback? Excursions into the afterlife?