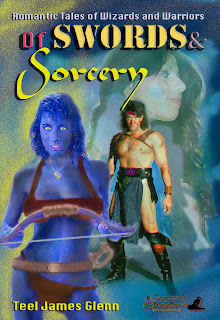 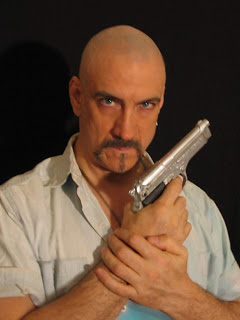 TJG: I was born in Brooklyn and was a sickly child who found refuge and strength in television (The Lone Ranger, Wild Wild West etc) and most especially in comic books and novels.

In fact I read anything I could get my hands on- I leaned to read from comic books then started on the Hardy Boys, the Three Investigators, Tom Swift, Tom Quest and finally the Doc Savage books (I loved heroes and series characters).

From Dent’s novels I found other pulp characters like The Shadow and the Green Lama and stumbled, by fortunate chance, onto pulp fandom. I was embraced by and embraced it doing illustrations for Tom Johnson’s amazing Echoes and articles for Paul Mcall’s Aces magazines.

But it was a decade or more before I began creating my own characters and moved to writing full time.

TJG: The great writer Algis Budrys once stated that ‘The essence of pulp writing is that it must offer a clear cut resolution to a sentimental problem.” White hats and black hats slugging it out. In the hero pulps the white hats always won; in the dark world of noir and hardboiled detective pulps it was not always a clear-cut thing and there were a lot of ‘grey hats’.

It is an era of covers painted in bold strokes and larger than life characters painted with equally bold strokes of the typewriter. I don’t think of it as an excuse for poor writing as so many literati would have everyone believe, but it was absolutely the place where dull writing is not allowed.

TJG: I attended Parsons School of Design intent on an illustration career when a chance meeting with a director at a party the day before graduation led to an audition and the lead part in a film. I continued to work as a book illustrator sporadically over the course of the next years, it became the ‘background’ career to performing.

A fan of action movie serials of old, I made a number of super 8 films in high school and when I launched on a film career began taking stage combat classes with various instructors including Errol Flynn’s last stunt double for stage swordplay. I began teaching stage combat, stunt work and related physical skills from Florida to Toronto.

All this was concurrent with his film career and employment as fight choreographer and performer at over fifty Renaissance faires as well as fight director for over a hundred stage productions And a stuntman or actor in over eighty films and several hundred soap opera appearances.

I’ve also appeared on The View menacing Lisa Ling, The Morning Show teaching Regis Philbin how to be a Swashbuckler and a host of news programs.

My most famous ‘small screen’ appearance was as Vega (and fight choreographer) in the worldwide web series “Street Fighter: The Later Years.” It was the most watched web series in the world at one time.

By far the largest part of my performing career has been in low budget fantasy/horror genre films.

All this background informs my writing with a number of my stories drawing on my theatre film or period work for authenticity.

AP: Introduce us to your nemesis of crime, Dr. Shadows and The Adventures of the Granite man. How did the pulps inspire this book?

TJG: I searched for a bit to find the elements of the pulp greats that appealed to me when I decided to delve into creating a “pulp avatar’-so to speak and what bubbled to the surface was Anton Chadeaux PhD who, the world would come to know—as Dr. Shadows! He was a petro-chemical engineer who dabbled in stage magic during college where he was something of a heck raiser and a wastrel. He undergoes a life transforming disaster in the mountains of Northern Korea when Chinese warlords in Japanese employ shoot down the plane on which he and his parents are traveling.

All are killed save the young Chadeaux.

He is left for dead, hopelessly paralyzed. Fate intervenes when he is found by monks from an ancient, hidden monastery. The monks of Wei practice Sulsa Do, a 2,000-year-old art that perfects the body and frees the mind.

His body is turned into a grey color that is the reason the bad guys call him “the granite man.” That and the body he builds from his new studies make him a formidable enemy to evil. When he returns to the west he establishes the Shadows Foundation for Justice. He gathers around him a loyal band of crusaders and so is born the legend of Dr. Shadows, a grey Galahad, nemesis of evil and last hope of the hopeless.

I work very hard to place him firmly in the world of the 1930s but exploring- I hope- some of the side areas that Doc Savage, the Shadow, the Green Lama and others don’t spend as much time with-namely the growing menace of Imperial Japan and prejudice against the Korean culture. I also bring my martial arts background into giving the stories a flavor I don’t think I’ve found elsewhere in period work.

His stories have been published in a number of Pulp books for a couple of years and a collection is finally out from Epress “Hex of Shadows” though all the rest of the series will be out from Booksforabuck starting in 2011.

AP: Who are The Exceptionals?

TJG: The Exceptionals is a high action saga set in the near tomorrow of 2030. It follows the adventures of a group of scientifically augmented, bio-enhanced government agents as they confront and come to question their own humanity and become aware of a vast conspiracy that threatens the downfall of the United States.

In this violent future the rise of narco terrorists and extra territorial criminals has lead the U.N. to create a new class of lawmen, The Exceptionals, –bio enhanced bounty hunters who can go almost any where in pursuit of these extraordinary criminals.

It is essentially a ‘realistic’ look at superheroes written with truly breakneck speed and almost a ‘old western’ sensibility of good guys and bad guys.

There are three books currently out from Whiskeycreekpress.com with more intended when I can get my schedule clear…

AP: Your writing covers several genres. Do you have a favorite in which to work or do you like to play the field and work in as many different genres as possible?

TJG: I always approach stores from character first, so the genre almost doesn’t matter (beyond certain conventions each genre calls for). I do ‘play the field’ for the fun of it to keep if fresh though.

AP: Who are some of your creative influences?

TJG: ER Burroughs, Lester Dent and Robert E Howard are top of the list for authors who understood action; Richard Matheson for his mood and characterization and Nathanial Hawthorne and Poe for their language.

AP: What does T J Glenn do when he’s not writing, acting, or sword fighting?

I don’t sleep much and my work is my recreation, actually. I am an avid old movie and tv fan- particularly 1950s TV. And reading my favorites like Hammett, Howard etc.

AP: Where can readers learn more about you and your work?

And on amazon, fictionwise, smashwords and gypyshadow.com

AP: Any upcoming projects you would like to mention?

TJG: I have a collection of stories about a husband and wife team –Moxie and Maxi Donovan- who investigate weird crimes in the 1930s—but with a light touch. Think of the Front Page meets White Zombie.

He’s a reporter and she a showgirl. Bela Lugosi even shows up in two of the stories as a good guy. The book is called Deadline Zombies and is out from BooksforaBuck .

And a new collection of “Shadows of New York” is set to come out early in 2011 to ‘relaunch’ the granite man to a wider audience.

AP: Are there any convention appearances or signings coming up where fans can meet you?

TJG: I’m not planning to be at any cons till Lunacon next year at the moment.

AP: And finally, what advice would you give to anyone wanting to be a writer or an actor?

TJG: Be born into a rich family. But seriously folks, neither field is an easy path so if you only WANT to do it you won’t last, but if you NEED to do it then push on through and enjoy the journey because you just may never end up where you expect.