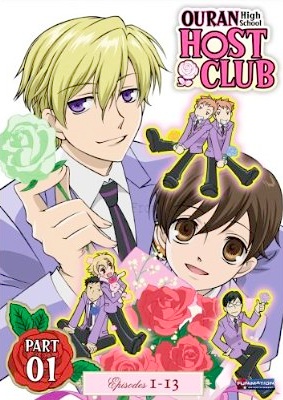 Last October, a horn player and otaku friend recommended a
shojo anime. OMG. Cute. I don’t do cute. But she persisted and I was
curious – a smart, geeky, poor girl gets into an elite academy for rich
kids on a full scholarship, feels totally out of place, and accidentally
becomes associated with the six smartest, most gorgeous, richest, blue-blooded
and most well-connected guys in the school…hmmm…been there, done that. No
really! My life is an anime! So I
looked. And I was hooked.

collection from Funimation (4 disks, extras like commentaries from the
American cast, about $50 retail, standard and blu-ray). But it was worth it.
And what could make a hard-core, anti-kawaii viewer like me get involved?
Simple – beautiful art, music, performances, writing and, most
importantly, characters and storylines that will make you laugh and cry and
care. In short, as I’ve said so many times before – it’s human!

And it does so by delighting all
the senses – the eye is treated to architectural renderings both
ridiculous and lush (English academy style in pink with cherry blossoms), the
music composed and performed flawlessly with elements of Bach Brandenburg
Concerti, Strauss Waltzes, and Chopin Nocturnes that will have you swearing
they’d been written by the great masters, but by Yoshihisha Hirano (Death Note), believable dialogue even at
its most outrageous, and glimpses into Japanese pop culture and history in
fascinating detail.

You can’t make this stuff up. There are, indeed, Host Clubs
in Japan at the high school and college levels that consist of gatherings
centered around the arts and culture, where charming young men treat young
women as honoured guests at their tables and in their salons. Ouran’s version
was founded by the unlikely pair of the second-year class’ #2 (French-Japanese)
over-the-top prince-type Suoh Tamaki, and #1 scholar and cool-type counterpart
Ootori Kyouya – both descended from noble families. They are joined by
the heroine’s first-year classmates, the fashion heir little devil-types
who fan the flames of Moe with hints of twincest – the Hitachiin Twins,
Hikaru and Kaoru. And another unlikely pair, third-year seniors, the
noble-and-servant cousins joined by marriage and martial arts champions –
the wild-silent Morinozuka Takashi “Mori” and loli-shota Haninozuka Mitsukuni
“Honey”. A type for any lady’s dreams come true.

And there’s our heroine, the
natural, incognito as a boy, Fujioka Haruhi – she broke an 8M Yen
renaissance vase and is now working the Host Club in order to pay back her debt.
The boys keep her superhero secret identity to themselves and wackiness
ensues. Truly, there are many laugh-out-loud moments in every episode. But
it’s not just about all the zany fun and it’s way beyond teenage angst and
typical coming-of-age learning experiences. These characters face real-life
issues head-on that are iconic in human life and they do so as only Ouran can
– beautifully!

Haruhi, with Kyouya, is the balancing Greek chorus of the
series vs. Tamaki, the Twins, and Honey’s kinetic energy (Mori observes). Her
refrains are, “I’m an honour student, not a superhero!” and “It doesn’t matter
whether I’m a boy or a girl or what anyone looks like!” Couple that with
Tamaki’s heartfelt axiom of, “It is our jobs as members of the elite Ouran Host
Club to make every girl happy,” and you have the ethical core of this show, its
heart, and it never strays (see the notorious episode 8 at the beach and interviews
with author Hatori Bisco, as well as the actor’s commentaries). It faces
issues of gender, sexual orientation, non-traditional families, business
ethics, education purposes, class, power, truth, love and relationships.
Aristotle would be pleased with its scope of drama and catharsis…Nicomachean Ethics in anime!

Among the best character-building eps are the summer break
storylines in Karuizawa (#15-17), a Halloween episode featuring the twins and concepts
of family, “Until the Day it Becomes a Pumpkin!,” a guest character two-parter
featuring a yakuza heir (#22-23), and #24 “And So Kyouya Met Him,” which
reveals the truths of our beloved megane and his best friend. It manages among
the most hilarious and touching moments of all 26 eps. And the 2-ep series
finale is a perfectly satisfying end, yet leaves you wanting more. There is a
fan campaign in Japan and here for a second season that more closely
follows the manga along the lines of what FMA
did with its two series. The anime aired in ’06, and was acquired and aired in ‘09
by Funimation due to the campaigning of voice actors Vic Mignogna (Ed of FMA, Tamaki) and ADR director Caitlin
Glass (Winry of FMA, Haurhi), taking
bits from about the first half of the manga. The manga was serialized in LaLa magazine beginning August ‘03 and
ends July 24th with chapter 81 (vol. 18, up to vol. 14 in the
States). The voice casting is a joy and full of surprises. In Japan Tamaki is
voiced by award-winning seiyuu Miyano
Mamoru, Death Note’s Light and FMA: Brotherhood’s Ling Yao. The
English script is rendered by J. Michael Tatum (Kyouya) and Monica Rial (the
crazed otaku Renge), translating the comedy and yet remains very close to the
Japanese, the jokes just as funny in the Japanese with subtitles as they are in
the English. Bravo!

This series has spawned many things – an audio drama, video
games for PS2 and NintendoDS, scads of merchandise, books, a convention, and at Animinicon SoHo this weekend, there will be the debut of the SoHo Host Club – the
first true Host Club in the US! – along with our own cast of talented,
cultured, chivalrous, beautiful, and utterly charming men.

So, watch the anime, read the manga, come to our events, and
in the words of the Host Club’s King, Tamaki-Dono: We welcome you to our world
of beauty! Mata Ashita!