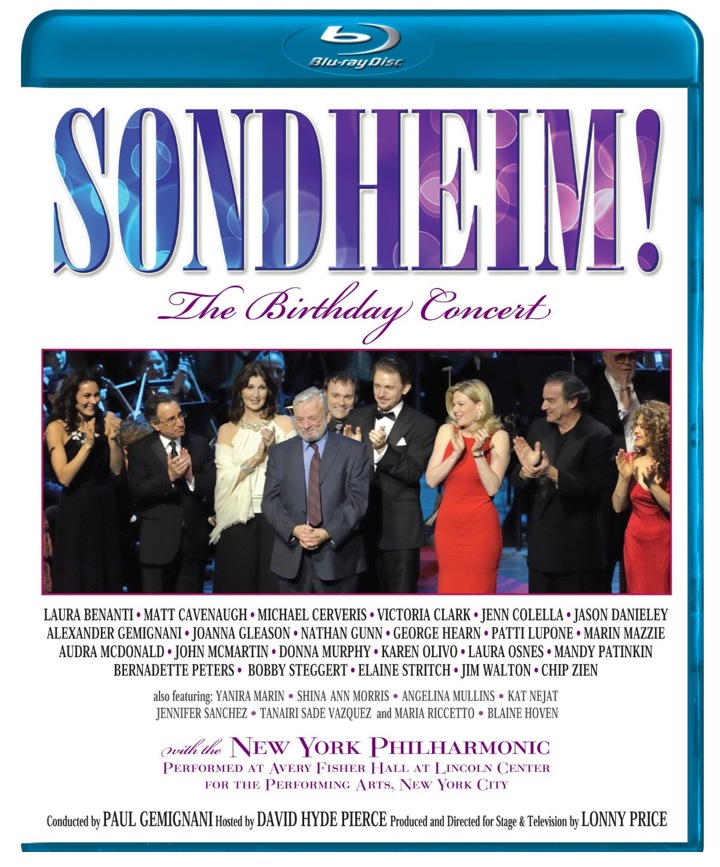 You are no doubt wondering why ComicMix is reviewing [[[Sondheim! The Birthday Celebration]]], the DVD edition of the 80th birthday celebration that aired this past week on PBS. Believe it or not, we believe in covering significant events in popular culture, not just the fads and the celebrities, but people who have made contributions that have proved influential to today’s creators. Stephen Sondheim, for over fifty years, has been elevating the musical theater art form, and his music and lyrics have found their way into books, film, and yes, comic books.

Musical theater in America came into its own in 1927 with [[[Showboat]]], co-written by Jerome Kern with book and lyrics by Oscar Hammerstein II. Its next evolutionary step came with [[[Oklahoma]]] in 1943, from Hammerstein and Richard Rogers. Living down the hall from the lyricist was a young boy named Stephen Sondheim. Their relationship helped Sondheim develop his ear for music and lyrics, letting him burst into the public’s ear with his lyrics to [[[West Side Story]]], the musical that propelled theater to a new era. His influence remains strong today.

What sets Sondheim apart from other playwrights and lyricists is the intelligence of his words. He expresses mood, feeling, emotion and character with a sophisticated use of language that has helped elevate the art form. More than that, he rarely repeats himself so the shows he has created on his own sound nothing like one another. He dares to explore subjects dark ([[[Sweeny Todd, Assassins]]]) and the more whimsical ([[[The Frogs]]]).

Given the lengthy number of shows he’s been involved with and multiply that by the number of memorable songs he has crafted, him impact is immense. To celebrate the occasion this year, he has annotated his works in the recently released[[[ Finishing the Hat]]]: Collected Lyrics (1954-1981) With Attendant Comments, Principles, Heresies, Grudges, Whines and Anecdotes. The world has honored him with numerous performances including two special nights at Lincoln Center in March which was recorded and formed the special we’re talking about.

Performing his works are stars young and old, familiar and unknown, but
all singing with affection (and some amazing diction). These include
Michael Cerveris, Joanna Gleason, Nathan Gunn, George Hearn, Patti
LuPone, Marin Mazzie, Audra McDonald, John McMartin, Donna Murphy, Mandy
Patinkin, Bernadette Peters, Elaine Stritch and Chip Zien. Paul
Gemignani, Sondheim’s longtime colleague, was conducting the New York
Philharmonic and the evening was hosted with wit by David Hyde Pierce.
There were some nice running gags that kept things light and you could
tell the performers were thrilled to be there. 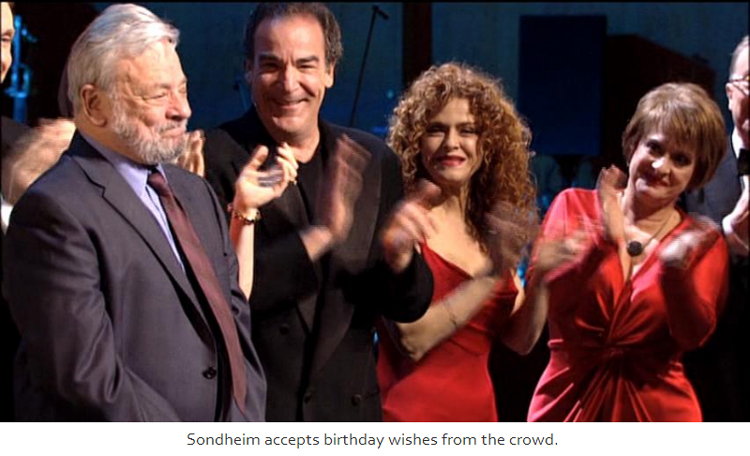 It was not a night of greatest hits as many numbers were new to me and
the selections favored Follies over some of the others. Highlights
include Mandy Patinkin and Bernadette Peters doing numbers from [[[Sunday in the Park ]]]with George
and George Hearn and Michael Cerveris, who both played Sweeny Todd on
Broadway, sharing the role in “A Little Priest” opposite the wonderful
Patti LuPone.

John McMartin was one of the original cast members to reprise his role,
singing “The Road You Didn’t Take” and there was also the entertaining
Joanna Gleason and Chip Zien, who reprised their “It Takes Two” from [[[Into the Wood]]]s. (Personally, I wish there was at least one song from[[[ A Funny Thing Happened on the Way to the Forum]]], but you can’t have everything.)

The best part came towards the end as a sextet of Ladies in Red took
seats on the stage and then one by one, stole the show. It opened with
LuPone’s “The Ladies Who Lunch” followed by Marin Mazzie singing,
“Losing My Mind”, succeeded by the stunning Audra McDonald who sang “The
Glamorous Life”. Then came Donna Murphy, a long way from [[[Star Trek: Insurrection]]], to deliver “Could I Leave You?” followed by Peters’ rendition of “Not A Day Goes By”. Last, and certainly not least, there was Elaine Stritch
with her anthem, “I’m Still Here”. During the songs, it’s a treat to
watch the women in awe of one another and then all rise to give Stritch a
standing ovation.

The final number saw performers from all current Broadway productions
file into the theater, crowding the stage and aisles, to sing to a
stunned and teary-eyed Sondheim.

Visually, the show looks wonderful in high definition and the sound is
pristine. If you love or like Sondheim, you can’t miss this. If you’re
less familiar with him and his works, by all means, expose yourself to
the most literate writer composing songs today.