A special feature today on ALL PULP!!!!  Today, reviews and other articles will be posted on ALL PULP throughout the day that are either written by, co-written by, or inspired by the juvenile offspring of the Spectacled Seven!!!  That’s right, kids are running up and down the halls of the ALL PULP sanctum, offering their opinions on tales told full of pulpy goodness!  You think kids don’t know pulp?   Well, after today, ALL PULP thinks you’ll learn that kids have much more exposure to this field we love than we think they do!

To kick it off, here’s my review (stepping outside my book reviews for this one, folks) of WIZARD OF OZ, co written in interview style with my five year old angel, Kailee….Enjoy! 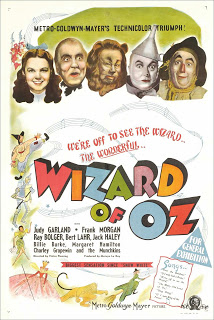 Pulp is an interesting genre. There are stories that fall definitely in the realm that anyone would call pulp. Then there are those that have hints of pulp in them, an aspect of the genre sorta slipped in for good measure, but don’t really meet the bar most fans set. Then there’s that third interesting creature, the tales that are pulpy from beginning to end, rifled with larger than life heroes, major action, and vile villains, but that somehow, largely due in part I think to when they originated and/or how they’re pigeonholed, don’t get seen as pulp.

With this being ‘Bring Your Kid to Work’ Day on ALL PULP, I thought I’d tackle one of these elusive Pulp chameleons, a wonderful cinematic action adventure tale that has masqueraded as family friendly kids fare for over seventy years. And to help represent that kid contingent, my five year old angel, Kailee, is my expert of reference on this movie gem. So through a series of questions and answers (with commentary by me afterward), I now present the review inspired and ‘written’ by Kailee Hancock of ‘The Wizard of Oz!’

(Clearly little Ms. Gale is the central character and the hero of this movie. She doesn’t throw punches, only melodies, and carries no gat, just all the emotional encouragement you could stand. But she is the protagonist thrown into a situation that would cripple most normal people, I mean come on, her house falls ON a witch and that’s just the beginning! And she has an unimaginable quest to undertake in a land that before Baum brought it into reality was beyond most imaginations. So, Dorothy clearly qualifies as the hero of this tale.)

AP-”Kailee, does Dorothy have a sidekick or work with a team?” 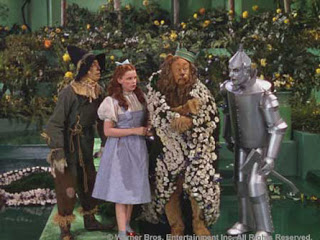 KH- “Yup. Toto is her sidekick and Scarecrow, Tin Man, and Cowardly lion help her a lot.”

(Not only does this grand epic have a hero, but she has an assistant, a sidekick, a constant companion. And Toto is not just window dressing. Actually in the movie, Toto is sort of the impetus of the whole thing with his ongoing battle with Elmira Gulch kicking off the action. He also comes to Dorothy’s rescue by escaping the witch’s castle and going for help (He is even more active in the Baum books). And who does he go to for help. Why, Dorothy’s intrepid team of experts in their fields. Well, maybe not, but they are each representative of certain types of people and, even with their own weaknesses, show through as clear examples of what they are seeking-Intelligence, Emotion, and Courage. Clearly the Scarecrow, Tin Man, The Lion, and yes, even Toto qualify as a team as much as most other pulp combinations would!) 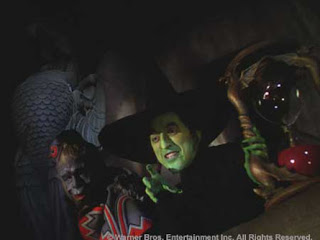 KH -”The Witch and she’s bad because she wants the ruby slippers and her sister was killed by Dorothy’s house.”

(There are very few villains in literature and especially in movies that out villain the Wicked Witch of the West. She is green, ugly, and on many levels malevolently evil. She also, however, qualifies as a pulp villain on a couple of other levels. Her goal is Oz domination, to be all powerful in the land, and to that end she pursues the ruby slippers that Dorothy now has. Also, she is out for vengeance for an imagined wrong committed against her. Well, the house landing on her sister wasn’t imagined, but the fact that Dorothy somehow did it intentionally was. So we have a wild looking, evil villainess who seeks to seize control of her world and feels like she’s entitled because of something she thinks the heroine did to her. Yep, sounds like pulp to me.)

AP -”Dorothy is trying to do what in the movie? What is she trying to find? And once she finds it, what does she have to do?” 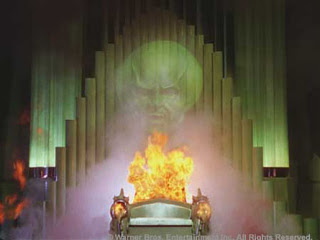 KH- “She wants to go home. The Wizard. He makes her go get the Witch’s broomstick.”

(Not only does Dorothy have her own personal quest, to get home, but she has to undertake a different one, to find the Wizard, to meet her own need. Along the way she picks up friends, enemies, and when she finally does locate the Great and Powerful Oz, the talking head gives her yet another, even more death defying mission to complete. I don’t think most pulp heroes have to complete THREE missions in their stories. Whew, give that girl a fedora.)

AP- “Are there weird creatures or monsters in ‘The Wizard of Oz’?” 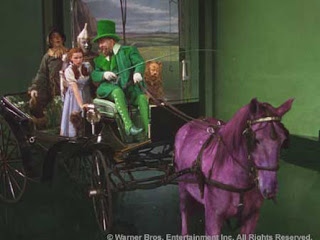 KH- “Oh yeah! Munchkins, flying monkeys work for the Witch, trees in the woods whack at them. And then there’s a horse in the city that changes colors!”

(Fantastical beings, monsters hell-bent on the destruction of the heroine and serving the villainess blindly, and a tiny civilization living under the threat of a great evil….need I say more?)

AP- “Who wins in “The Wizard of Oz”? How does the good guy beat the bad guy?”

KH- “Dorothy! She melts the Witch with water!”

(Not only does the hero win, but the viewer is given a great climactic final confrontation scene where the villain is not simply beaten, but MELTED out of existence! And the hero doesn’t bring this end about intentionally, but out of a sense of trying to help the Witch, to save her life. Yeah, clearly defined good guy and obvious bad guy. To the end.) 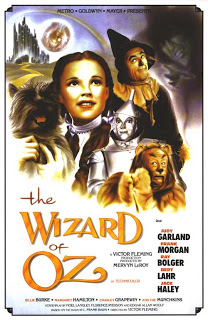 Now, remember, this review is on the movie. We haven’t even addressed the multiple books Baum wrote in the ‘Oz’ series and the fact that although they didn’t appear in pulp magazines, they did appear as newspaper serials initially, sort of the precursor of pulp fiction.

So, you make the call. As for me and Kailee, “The Wizard of Oz” isn’t JUST a good kid and family movie.
It’s also one great pulp romp!

RATING-
As determined by Kailee, Five Tips of the Princess’ tiara-The best of the best for a five year old. Her dad has to agree.