Review: ‘Legends of the Superheroes’ 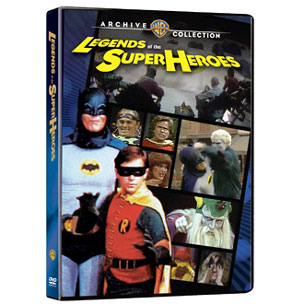 The 1970s was not a kind decade for live-action television based on comic book heroes. First there was the Cathy lee Crosby misfire of a [[[Wonder Woman]]] telefilm then there were the Reb Brown[[[ Captain America]]] telefilms.[[[Spider-Man]]] made it to prime time as a series but it didn’t resemble the comic in tone or style and died a swift death.  But the absolute most mind-numbing and cringe worthy hours featured DC Comics’ stalwart heroes and villains.

I’ve never seen an NBC executive explain what made them think the two specials that aired in January 1979. The Challenge and The Roast, aired as [[[Legends of the Superheroes]]], were probably the first time mass audiences were introduced to [[[Green Lantern]]] or[[[Flash]]] or Hawkman but they certainly knew Adam West’s Batman, Burt Ward’s Robin and Frank Gorshin’s delightful Riddler. As a result, the aging trio donned the tights once more to anchor the two specials. A veritable who’s who of B-list performers and outright unknowns filled the remainder of the costumes.

Comic book fans probably loved seeing Captain Marvel, Hawkman, Huntress, Black Canary, and others in real life but the shows did not earn great ratings and have been derided by those who recall seeing them. While illegal bootlegs have circulated for years, Warner Archive has collected them on a single disc from the best source material available.

You have to love kitsch, bad writing, awful acting, and comic books to enjoy (or endure) these specials.

The Challenge pits a gaggle of villains led by Mordru the Merciless to once more destroy the world. The heroes split up and run around like idiots in an attempt to find and disarm the doomsday device. Mike Marmer and Peter Gallay, who wrote the script for both specials, apparently never learned that humor is derived from character and situation. Not a single hero or villain has a personality depriving the story from any humorous opportunities. The heroes act like dim-wits and never use their powers when they would be needed. The laugh track is badly handled since it is triggered by the lamest of activities. The costumes are authentic but clearly done on the cheap as were the visual effects. (And why on earth is Batman’s cowl worn over his cape?)

The Roast, hosted by Ed McMahon, has some genuinely funny lines but far too few and again, mostly ignoring their characters so are generic jokes. The villains and others arrive to roast the collected heroes, causing mayhem and nonsense.

Nicely, the disc does contain some deleted scenes and outtake, making this a true collector’s item but this is really for the die-hard fans only.