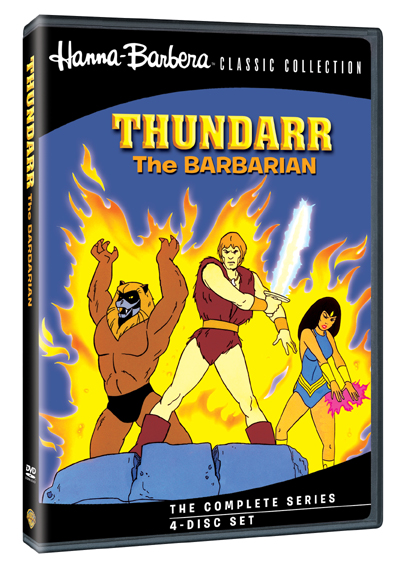 Ruby-Spears was a strong competitor to Hanna-Barbera and Filmation when they arrived during the 1970s. For ComicMix fans, their brightest moment may have been the imaginative and visually interesting [[[Thundarr the Barbarian]]], which aired a mere 21 episodes. But, boasting the designs of Jack Kirby and Alex Toth, along with the writing prowess of Steve Gerber, Martin Pasko, and others, the show has remained a fan favorite.

We were reminded of the show’s potential when the first episode was included in the [[[Saturday Morning 1980s]]] set from Warner Home Video. Now, their sister division, Warner Archive, has released a complete four disc set of the series. Amazingly, though, Lords of Light! an eighteen minute piece all about the creation and enduring appeal of Thundarr the Barbarian that was on the former set, is missing here.

The series ran during the 1980-1982 seasons, on ABC. Thundarr is a nomadic barbarian (aren’t they all?) who meets up with the sorceress Princess Ariel and the mutant being Ookla the Mok in a post-apocalyptic Earth circa 3994 A.D.. The odd trio wander the ravaged planet and have many exciting exploits as we slowly try and piece together what may have happened to the Earth.  What’s left has been divided into territories with a variety of powerful rulers, all coveting power and more land. Nearly two millennia later, there are enough visual artifacts still extent to cue the viewer that this remains our world, after the worst imaginable has happened. The writers and animators wisely send the heroes around the world to show that the devastation was not merely limited to the United States.

The strongest example of the world’s cataclysmic events may be the constant visual of the moon, broken in half, which we’re told happened in 1994 when a rogue comet passed by. It was the shattering of the moon that altered the tides and the weather, beginning the changes that continue to mark the planet.

There were changes to the people and animals too, leading the rise of the Moks, a cross between lions and humans. Ookla was enslaved until freed by Thundarr and the grunting companion was forever loyal thereafter. Thundarr seemed to know the Mok language, at least enough to comprehend Ookla’s intentions.

The state of science fiction in the late 1970s can be felt here such as Thundarr’s sunsword which looks remarkably familiar. Toth’s lead character designs are his typical strong work while Kirby lent his pencil to the opponents, both human and non-human, in subsequent episodes. As a result, scholars look for links between Thundarr and Kirby’s own post-apocalyptic Kamandi.

The key difference between the series was that in Thundarr’s world, magic was a part of the world. Ariel was the daughter of the evil wizard Sabian and she was highly educated, knowing much of Earth’s pre-apocalyptic history. She was throughtful and kind, a strong companion to Thundarr but never really a romantic interest.

The stories were a cut above their competition thanks to the strong staff, led by Gerber, Pasko, Buzz Dixon, and even the nascent writing team of Roy Thomas and Gerry Conway. They brought their comic book storytelling sensibilities to the series and it benefitted. Watching the shows today, you have to remember that this was during a period when direct violence was limited and action rarely involved any hand-to-hand combat. They are at worst, diverting and at best, highly entertaining.

The transfers are fine although some clean up would have been nice. Overall, this is a nice artifact from a bygone era.