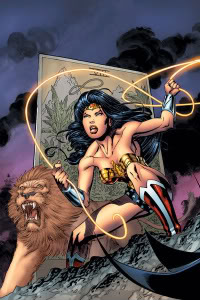 This issue is titled "A third symbol now…" but a more accurate one would be "OK, so here’s exactly what’s going on."

For six issues, Trinity was a fairly opaque book, with several seemingly disparate storylines and a completely mysterious large threat — the one screaming "Let me out!" in issue one.

What do we know now?

All the "disturbances" from issue two are an unknown form of primal energy. "Creation energies." The heroes quickly put two and two together and check on Krona, that Oan who tried to manipulate the beginning of the universe and accidentally created the multiverse (check out Crisis on Infinite Earths

for more on this).

Later in the book, it’s revealed that Krona is in fact the mysterious shouter of "Let me out!" that the trinity has been hearing. And, it’s a bit hard to decipher, but it appears that he’s getting close to escaping from the cosmic egg, if he hasn’t already.

The heroes are gathered to talk about all the goings on. They figure out the rash of museum robberies has all been to obtain wands, swords, pentacles and cups, which happen to be the four suits of the Tarot. Which leads them to Tarot, the girl who was kidnapped last issue by Morgaine Le Fey’s monsters.

They also have a third symbol appearing on Wonder Woman’s scar. The three are ancient Egyptian symbols: Strength, the high priestess and the world. Three symbols tied to our three heroes.

"It’s very, very big," Wonder Woman says of all this stuff adding up. But, again, we’ll have to take her word for it. Because while we’re getting a better picture of the individual strands, there’s still no sense of what’s tying everything together.

On the villain’s side of things, Le Fey and Enigma somehow transport themselves to Krechin, "largest moon of Itatoq." There they find a victorious Despero, who has waged a massive war to obtain a rock, and he unfortunately doesn’t know what it is.

Enigma and Le Fey seem to know, though, as they ask Despero if he’d like to be "a lord of creation." Seems like that can’t be coincidental wording, and it obviously ties back to Kronas. Hmm.

All in all, it’s a decent enough read, though it doesn’t get at all into the personalities of the big three, which had carried some earlier issues.

It’s nice to see everything coming together, and Busiek has established a good scope, as whatever’s going on ties into the creation of everything. But what he hasn’t established at all is the importance of Superman, Wonder Woman and Batman to the storyline, which is not a great sign nearly two months in.