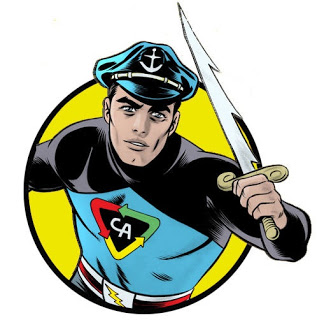 AP:  Mike, thanks for stopping by ALL PULP again, especially after your busy weekend.  Tell us a little about New York Comic Con?

Mike Bullock: The show was a lot of fun. We started off Friday night with the Lions, Tigers and Bears panel put on by the fine folks at our new publisher Hermes Press where I was able to spend time with some great fans of the books. The convention wasn’t too crowded on Friday and it was pretty easy to find your way around and see some of the wild things going on.

Saturday, I think half of NYC crammed into the building, or so it seemed. I spent some time in artist alley talking to a lot of fine folks, then did several interviews and finished off the day by signing Phantom, Captain Action and Savage Beauty swag at the Captain Action booth.

My lovely wife and I spent Saturday night and Sunday bopping around Manhattan and Brooklyn, doing the tourist thing. I can certainly see why so many writers want to live in NYC. I can’t imagine ever running out of story ideas when you can walk through Time’s Square, Chinatown, Central Park, SoHo and Brooklyn Heights all in the same day.

AP:  Now, you weren’t at NYCC just for fun and giggles?  Share with our audience the major announcement that concerned you.

MB: Well, there were several. First was the news that my all-ages series, Lions, Tigers and Bears has moved over to Hermes Press as the flagship title in their new line of original graphic novels. We’re putting out the long awaited LTB volume III in March of ’11 and artist Michael Metcalf and I are already laying the groundwork for volume IV. Pulp fans should certainly have Hermes on their radar already, as Hermes is putting out the Phantom and Buck Rogers newspaper strip reprints, among other things. They debuted an awesome John Buscema book at the con, also. It’s something every comic art fan should own.

Next up was the announcement of the format for Savage Beauty #1, which is now an oversized 40-page book, featuring a 22-page main story, a golden age Sheena back up tale and other goodies all for the low cover price of $2.99. There was a great buzz for the book going on, which was certainly exciting. I think I signed more SB shwag than anything else.

The third announcement was that I’ll be taking over the writing on the main Captain Action title beginning with #1 of season III that should hit shops later on in 2011. Steven Grant, the writer for season II has done some really incredible things (wait until you read #3 & 4) and I’m excited to build off that for the future of the A.C.T.I.O.N. Directorate’s top agent.

AP:  That’s fantastic!  Getting a new gig is always a big deal, but is there something special for you about getting to write the further adventures of Captain Action?

MB: As a kid, I missed the Captain Action boat by a few years (I was a die-hard Big Jim kid) but when I discovered it later on in life I felt like I really lost out on something special. I mean, what kid in the ‘70s wouldn’t want an action figure that could turn into the Phantom, Spider-Man, Flash Gordon or Batman? Once the Captain Action comics started coming out through Moonstone, I really liked what they were doing and loved the premise of the character that Fabian Nicieza had crafted. Then, when I got my turn to write a story with Cap (The Phantom/Captain Action miniseries) it really seemed like writing Captain Action would be a lot of fun. He lands somewhere between James Bond, Big Jim and all my favorite superheroes mixed into a giant vat of little boy wish-fulfillment, which are all things right up my alley. So as you can imagine, I’m pretty jazzed to write this book.

AP:  As a writer, what do you think you bring to Captain Action that will make it stand out as similar, but different from what’s come before?

MB: Honestly, I don’t know that I’d ever thought of it in those terms, so I’m not sure I can give you an answer that suits the question. But, the 8-year old inside me will certainly have a blast playing with the original A.C.T.I.O.N. hero in the pages of comics. I’ve never done spy stories, so I’ll have to stretch myself/challenge myself, which is good, too.

AP:  Any major plans (or even hints and teasers) of what’s to come for Captain Action and crew from the pen of Mike Bullock?

MB: Well, you can expect to see new villains, new heroes, new threats, the return of some familiar faces and a mission that’s out of this world, literally.

AP: Thanks, Mike!  Can’t wait to see what happens with Captain Action!