The Return of King Pong! 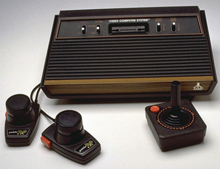 Since inventing the video game industry, Atari has changed hands and chief executives more times than a politician with Parkinson’s Disease.
They’ve got a new owner, a game industry veteran known for turning around
troubled companies, and he’s sure got his work cut out for him.

According to the ChicagoTribune, their plan is to come up with new versions of games like Missile Command and Centipede, but put them online for download or for play on social network sites. Evidently they’ve heard the whimper of baby boomers drowning in nostalgia.

They managed to bring Atari co-founder and Pong inventor Nolan Bushnell onto their board. “The company wasn’t just being mismanaged, it was being abused,” Bushnell said, without specifying exactly which of Atari’s countless owners was at fault.

The All-New yet All-Old Atari also is aggressively licensing its original logo for a slew of items, including bags, hoodies and wallpapers. Oh, yeah. They also want to do movies based on their properties and have signed development deals for Asteroids at Universal Pictures and Roller Coaster
Tycoon at Columbia.

The new Atari should remember the immortal words of Rocket
J. Squirrel: “But that trick never works!”