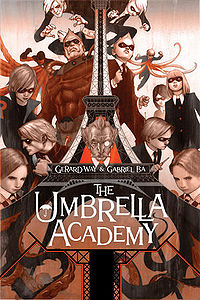 Deadline Hollywood Daily reports that Universal Studios and Dark Horse Comics, the folks who brought us Hellboy II: The Golden Army, are continuing their long-standing relationship and fast-tracking a movie version of The Umbrella Academy. The Eisner-winning series was written by Gerard Way, former intern at DC Comics who later went on to international fame as the frontman for My Chemical Romance.

This proves what I’ve suspected for a long time: if you’re going to do anything big in the world– rock star, movie mogul, Eisner winner– you have to stop being an intern at DC.