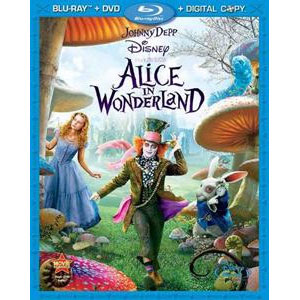 On the face of it, Tim Burton and Johnny Depp teaming up to interpret Alice in Wonderland

sounded ideal. Too perfect and maybe that was the problem. Burton is no stranger to flights of fancy and provided us with a modern day fairy tale in [[[Edward Scissorhands]]] (just named by Entertainment Weekly as one of the top 10 characters of the last 20 years). His visual imagination is apparently limitless as he provides a fresh eye to each film he makes. His collaborations with Depp lead to engaging performances as the actor vanishes into each role.

And yet, the spring film did not excite me. Not an adaptation of the Lewis Carroll books, but instead a sequel of sorts, as Alice returns to Wonderland. We open with a nearly 15 minute set-up as we learn that young Alice, just back from her first journey, has lost her father and the she and her mother must shoulder on. We then cut to thirteen years later and now Alice, 22, is being pressured by society to marry a bore of a Lord. Just as he prepares to publically pop the question, a rabbit catches Alice’s eye and back to Wonderland she goes.

Things are much bleaker since she last visited now that the wicked Red Queen has used a Jabberwocky (depicted as a dragon-like beast) to terrorize Underland.  Few believe she is the same Alice but must be since there is a recent legend saying that only Alice, on Frabjous Day, will free the people by slaying the creature.

To reach this inevitable point, Alice is shuttled between the Red Queen and the White Queen with all the Carroll characters showing up for a cameo or to advance the plot.

While Burton said he didn’t adapt the [[[Alice’s Adventures in Wonderland]]] and [[[Through the Looking-Glass]]] because he didn’t feel an emotional connection to the stories, he fails to make audiences feel any connection to Alice and her cronies. We’ve seen them in endless interpretations and our expectations were that Burton would show us something new, make us drop our jaws and whisper, “Wow”.

Didn’t happen. At least now while I watched it at home on the crisp Blu-ray disc, released as part of Walt Disney Studios Home Entertainment’s combo pack released this week. Maybe something magical happened on the big screen and in 3-D. But I felt like we were being put through the paces, setting up a way we’ve seen a million times before, and certainly not helped when Alice arrived in armor borrowed from the [[[Narnia]]] films. It’s fitting that the final battle takes place on a chessboard field.

The performances – from Mia Wasikowska, Johnny Depp, Helena Bonham Carter, Anne Hathaway, Crispin Glover — are larger than life as befits the source material. But everything is too on the nose, from the uptight British high society to the Mad Hatter. We’re not surprised or enchanted and are ultimately left feeling disappointed. It could be that Burton could never live up to the expectations, the price one pays for having a reputation for being a visionary.

The movie looks and sounds great on the Blu-ray disc. While those watching just the DVD get three bonus features, there are  plenty of goodies packed on the other disc. You can watch the cast and crew pontificate on six of the characters in the shorts labeled Wonderland Characters. There are six other shorts found under the Making Wonderland umbrella. You get a sense of how much was shot live and just how much was shot using green screen and digitally added (allowing Burton’s visuals to be faithfully reproduced).

For a film that quickly took in over a billion dollars since its release I came to this expecting far better but sometimes, peering through the looking glass, all you see is a pale reflection or something all too familiar.