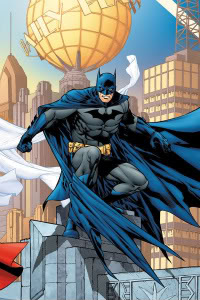 Two weeks down, and things are already heating up in DC’s weekly series Trinity.

We left off last week with [[[Superman]]], [[[Wonder Woman]]] and [[[Batman]]] all under the gun from mysterious forces: A dwarf solar system appears in Metropolis, giant robots attack Washington D.C., and Gotham… becomes Olde Timey?

The main point of interest is the nature of the attacks, and the way in which each hero handles the threat. Superman saves civilians and acts tactically. Batman wills Gotham back to normal by refusing the vision. And Wonder Woman smacks the crap out of some robots.

Based on what we’ve seen so far, the central notion of this series lies in exploring the identity of these three main heroes (in the first issue, this came up in how each saw variations of the same dream). Clark is a protector, Diana is a fighter and Bruce is…

So far, writer Kurt Busiek is leaving that one open, as the bizarre transformation of Gotham could imply a lot of things about Batman. It’s also interesting that Bruce is the only one of the three to remark on the strangeness around him.

Why would Busiek only hang a lampshade with Batman? Maybe it has to do with him being the lone human of the Trinity, and thus a stand in for readers. Food for thought.

Last issue’s backup story with villains Morgaine Le Fey and Enigma bump into the main story this time around, as the evil duo are magically peeping on the heroes and talking further about how the three heroes are “keystones to universal power.”

It seems that Le Fey and Enigma were the source of the attacks on the heroes, though last issue put the villains’ first encounter after the heroes had been attacked. Maybe the editors just haven’t worked all of the kinks out of this two-part structure.

One big question that came up last issue and remains in play is: How compelling can this series be when the villains are so worthless?

Enigma continues to be annoying and unimpressive, and Le Fey is one of many examples of stupid comic book characters adapted from folk tales and myths. In the [[[Sinestro Corps War]]], I remember being almost overwhelmed when Geoff Johns pulled out Sinestro, the Anti-Monitor, Hank Henshaw, Superboy Prime and Parallax as villains. So far, Trinity is the exact opposite of that.

The Stupid Villain Express rolls on into the backup story, which features John Stewart fighting against Konvikt. Yes, Konvikt, the big purple guy.

As if that wasn’t bad enough, Konvikt’s little alien pal Graak rates right up there with Gleek and Jar Jar Binks on the list of most annoying aliens ever. Let’s just say if I had to pick two dinner guests out of Graak, the queen from [[[Alien]]] and one of the [[[Predator]]] dudes, Graak would be staying home.

Overall, it’s a half of a decent issue that hints at big things to come. I guess we’ll just have to see how patient readers are.