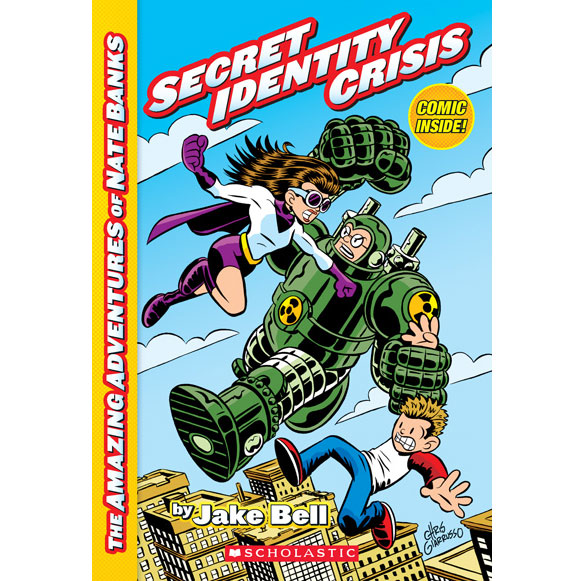 It seemed fairly inevitable that as super-heroes and graphic novels grew more prevalent for younger readers, there’d be a greater variety in presentation. Jake Bell and Chris Giarrusso have come up with something a little bit different: young adult prose books with 8-page comic sections.

Bell, an experienced writer, offers up [[[The Amazing Adventures of Nate Banks]]], comic book expert and middle school student in the new Scholastic series. The first two volumes were simultaneously released this month to give readers a chance to enter and immerse themselves in Nate’s colorful world.

The precipitating event is the arrival of [[[Ultraviolet]]]], a brand new super-heroine in the small suburban community of Kanigher Falls. Her arrival prompts speculation over who she is and why the community, which lacked its own resident metahuman. The world of Nate Banks is one filled with super-heroes and the requisite super-villains where people accept their presence.

Book one, [[[Secret Identity Crisis]]], is all set up and introductory material so we meet Nate, his family, his friends, and his teachers while also giving us the early days of  Ultraviolet. The second volume, [[[Freezer Burned]]], picks up a short time later as Coldsnap comes to town ostensibly seeking a valuable diamond on display but Nate figures out there’s more to his scheme.

The books are nicely constructed and written. While many of the twists and turns are telegraphed and therefore lack surprise, the stories move along briskly and expand this inventive world that clearly pays homage to beloved comic book creators from Jack Kirby to Steve Gerber.

Bell fails, though, to create original and interesting characters. Nate is a fine protagonist but his friends and family all come from a stock company. Most have little or anything to do or say that don’t further the story and lack any sense of dimension. The same for Ultraviolet, the town’s hero and budding friend to Nate, who actually has less to do in book two than she should.

The comic sections provide additional background and information to each story. Giarrusso, an incredibly talented and funny writer/artist in his own right, does a nice job here and on the covers.

This series is off to a solid if unspectacular start. If more arrive, hopefully Bell will deepen the supporting cast and offer up some truly interesting characters and complications.