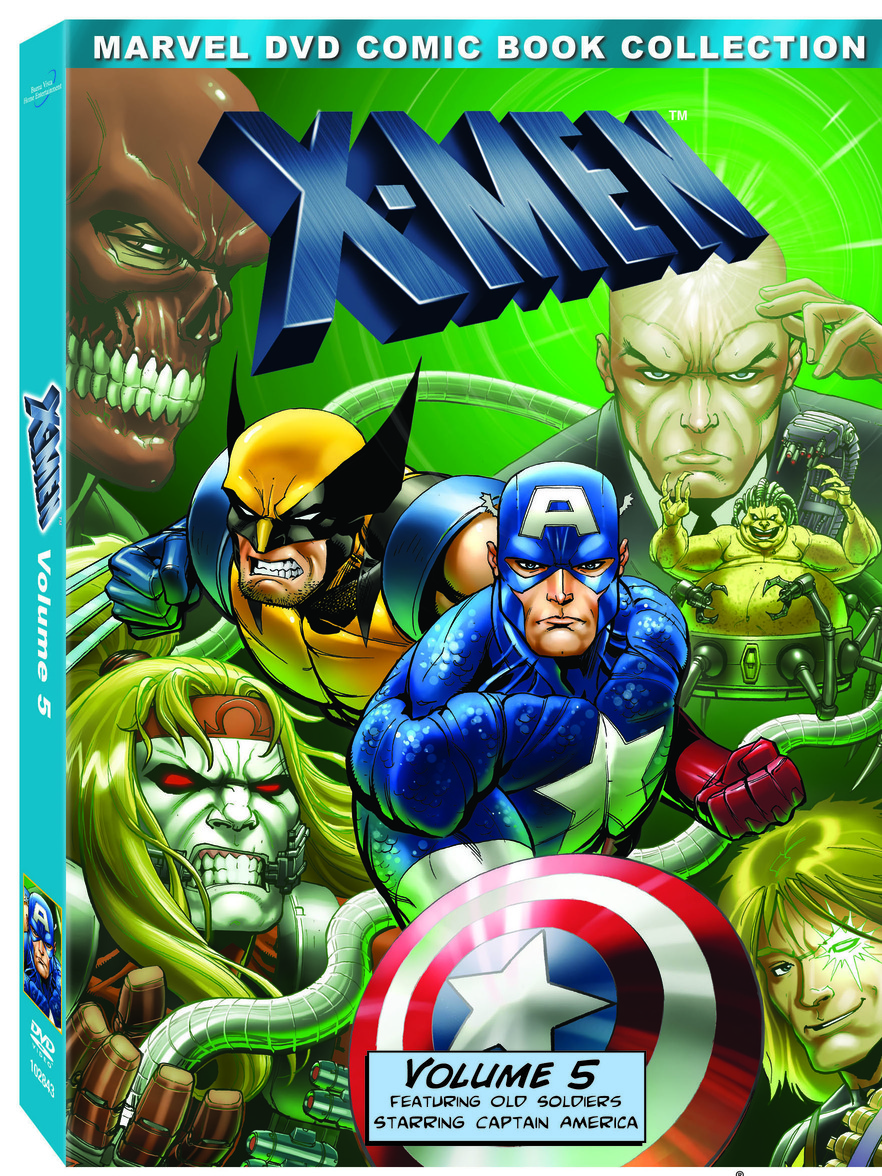 With [[[Iron Man 2]]] opening on Friday, everyone has decided to jump on the comics bandwagon and is flooding the shelves this week with Marvel-related fare. Walt Disney Studios Home Entertainment joins in the fun with the two-disc[[[ X-Men]]] Volume 5, completing the classic 1990s animated collection.

The 14 episodes presented here are in airdate order and span 1996-1997 and seasons four and five of the Fox series, which has remained the longest running Marvel animated title. The show was incredibly faithful to the source material, with former X-editor and then-Editor-in-Chief Bob Harras working as a story consultant. The show also had the unqiue aspect of having lengthy sub-plots allowing breadth and depth of subject matter most animated fare previously could not enjoy.

Comparing this to the adaptations of the same stories by the more current [[[Wolverine and the X-Men]]] shows the greater freedoms taken by the new creative staff—and not always for the better.

Given a variety of technical production delays, episodes were prepared out of order and writer Steven Melching always directs fans to the script numbers to show the proper story evolution. Instead, the five volumes have presented the shows in airdate order, which could prove confusing.

The series had horrible vocal casting but at least had strong animation direction. However, when Fox belatedly ordered a handful of additional episodes, Saban farmed out the animation to the Philippine Animation Studio, and the inferior quality is marked as you will see upon rewatching.

Disc one opens with the two-part “Phalanx Covenant” featuring the goofy but loveable Warlock. We switch focus to Omega Red, a then popular foe, in the long-delayed “A Deal with the Devil” which nicely spotlights Wolverine, Storm, and Rogue. Also delayed and finally aired at this point are “No Mutant Is an Island” and “Longshot”. The former treats Jean Grey as still dead although the animated continuity at this point had resurrected her but nothing was done to accommodate this. And while Longshot himself was nicely handled, I never cottoned to Mojo, who is played far too broadly here.

Any real sense of episode to episode continuity is gone by the second disc and the inferior animation is truly sad to see. As highlighted on the box cover, “Old Soldiers” is a flashback to World War II and a Wolverine tale. He partners with Captain America to take down a traitorous American scientist and the Red Skull (of course). The dialogue is nicely handled by Len Wein although the story felt tired.

The additional order did allow for a finale, “Graduation Day”, which saw the anti-mutant prejudice take a decidedly deadly turn as Xavier is fatally shot. Mutants around the world seek a leader and flock to Genosha, looking to Magneto for guidance. The X-Men arrive to solicit his help and Xavier gets a happy ending. He also gets a chance to say farewell to the core X-Men and the viewers, with the series ending on a cautiously optimistic note.

There are no extras on the collection, but if you have the first four volumes, you can’t possibly miss out on this one.