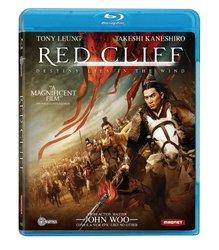 The history of the world is rich with stories of personal triumph and epic events. In fact, so many stories remain to be told to modern day audiences, you would never need to leave the non-fiction section to find stories to tell. In school, we’re given such a surface review of global history that we’re constantly amazed to find out what really went on.

Take China for example. The country is our partner and rival in modern day affairs but what do we know of a land that can trace its culture back thousands of years? Sure, we were taught they were largely xenophobic and measured their rulers by dynasties but little else. But, to those growing up in the Pacific Rim, the stories of great warriors outnumber those we can tell about out forefathers.

This point is brought home in the release this week of the stunning [[[Red Cliff]]]. Director John Woo has wanted to tell this story about the fall of the Han Dynasty since childhood and spent years researching it, more years to craft a script and then months to film the story.

In 208 A.D., the Han Dynasty Emperor grants permission to the greedy General Cao Cao to form a movement that will pulverize two warlords who stand in his way.  The warlords, Liu Bei and Sun Quan, are sworn enemies but know their only hope for survival is to band together and counter the attack. Although outnumbered by Cao Cao’s vast and fast approaching army, the warlords put their rivalry behind them and end up surprising all those who doubted their small brigade.

History, as we know, is written by the victors so most accounts make Cao Cao out to be evil incarnate but Woo wisely sourced most of the facts and character descriptions from the more level-headed Records of Three Kingdoms. This certainly makes all the players far from cardboard caricatures.

The story was so epic in scope, akin to [[[Lord of the Rings]]], that he shot a four hour film that was released internationally in two parts. A 148-minute edited version came to America last year, garnering excellent reviews although it didn’t perform well at the box office. The movie has been released by Magnolia Home Entertainment in a variety  of formats such as the two-disc Blu-ray International Edition with the complete film or the single disc with the shortened version. Both come packed with extras galore.

In watching the 148 domestic version, I thought I had seen enough. The problem for me was that too many of the key players were not developed as characters with Woo’s emphasis on his trademark action sequences which were larger and more involved than ever. As a result, Cao Cao is not the standard movie villain but also remains enigmatic, his true goals and desires absent. Similarly, Liu Bei and Sun Quan’s enmity is left mentioned and unexplored so their alliance is missing the significance it should otherwise posses.

What impresses me is how the struggle involved early forms of biological
warfare and the complex understanding  of the weather which was used to
time when the climactic attack could begin.

The performances by veteran Asian actors including Tony Leung, Takeshi
Kaneshiro, Zhang Fengyi, Chang Chen, Hu Jun, Lin Chi-ling and Zhao Wei
is also undercut by fairly flat line readings by the performers who did
the English language dubbing. You get a sense of their work through
looks and actions, but sadly, it’s incomplete and unsatisfying.

What you do get in this $80 million production is scope. Every scene is
rich in detail or filled with warriors in elaborate gear with fine
looking weapons. It has that Cecil B. DeMille feel, a cast of thousands
rushing headlong into battle. There’s a grandeur to the soldiers making
perfect formations or fleets of ships sailing in to battle.

The story is deserving of such treatment and the movie is well worth
your time and attention. The extras are as involved as the movie itself
with a 2:25 lengthy Making of Documentary (in standard format) along
with another 30 minutes of Woo being interviews and revealing which
battle aspects he made up and which were based on the facts. There are
also storyboards which show the thinking that went into the film.