Review: ‘The Princess and the Frog’ on DVD 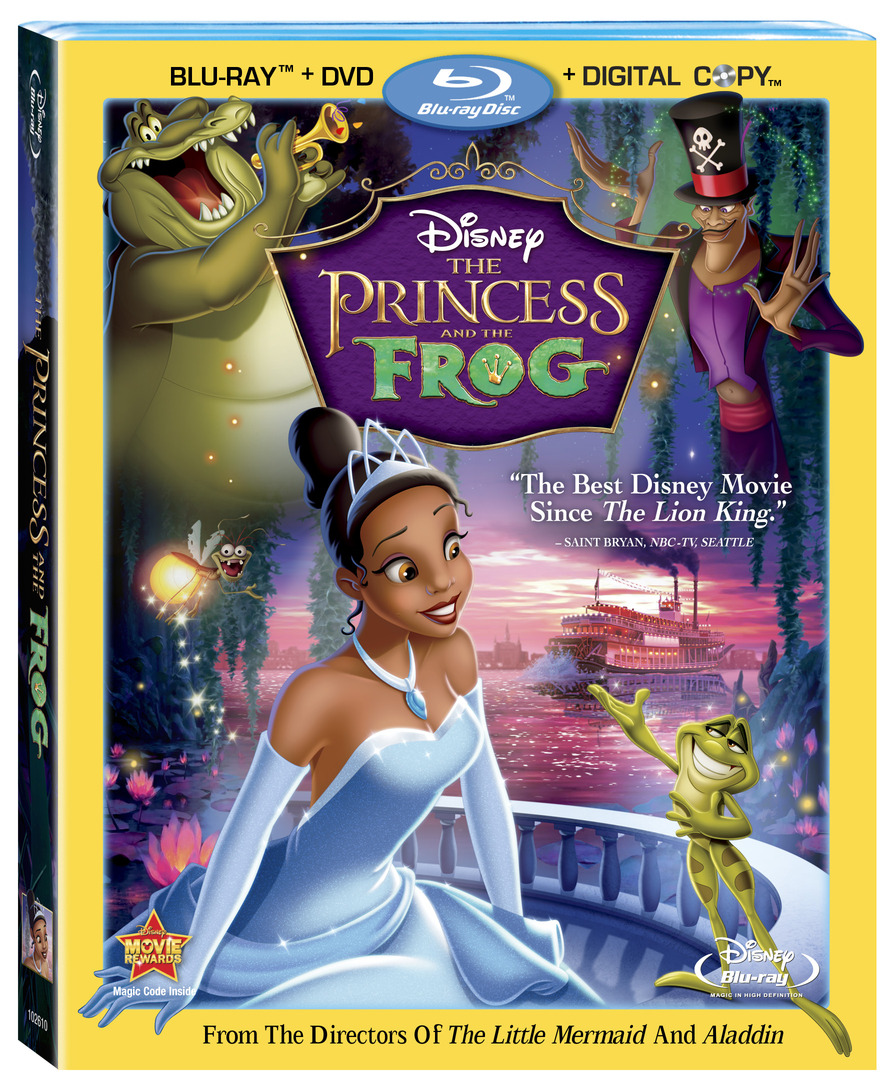 There’s a documentary about to open, [[[Waking Sleeping Beauty]]], focusing on the decade that saw Walt Disney Studios regain their mojo and produce a new generation of wonderful animated films beginning with [[[The Little Mermaid]]].  I’m really looking forward to seeing how that happened but we all know how it ends. Pixar’s CGI efforts arrived with [[[Toy Story]]] and suddenly 2-D movies looked like something from a fairy tale, old and tired. Disney shuttered the animation department.

When Pixar and Disney merged, the best thing to come from that was John Lasseter coming home and declaring that hand-drawn animation was far from dead. That statement became a fact last November when The Princess and The Frog

was released. Now on home video from Walt Disney Home Entertainment, it is a worthy addition to the family library.

John Musker and Ron Clement, who will get their due in the documentary, return as co-directors and it feels like they have not missed a beat. The movie follows what has become a standard template for a Disney film but they wisely spice things up much like the gumbo seen in the movie itself. Rather than adapt the tale and setting it in Europe, they felt a new venue was in order. New Orleans in the 1920s was an inspired choice, allowing them to feature people of color, along with the attendant dialects and influences.

The latest princess is not the first of color, a designation that more properly belongs to Princess Jasmine from Aladdin but having a largely African-American cast was long overdue. Fortunately, New Orleans has always been a real gumbo, mixing a little bit of everything and everyone so it’s the first truly multi-racial cast.

The story is entertaining with lessons learned and laughs to be enjoyed. The power of love proves more magical than anything conjured up by the malevolent Doctor Facilier. Also magical is the music from Randy Newman. While none of the numbers seem to be breakout hits, they do serve storytelling purposes and does give a number of performers, including the great Doctor John a chance to reach a wider audience.

Disney also uses a nice diverse vocal cast and the standout is Anika Noni Rose as Tiana. Everyone else is fine and well cast.

The movie is available in the now-standard combo pack so you get the Blu-ray, standard and digital disc in one nice package. Visually, the animation is bold and bright and eve more colorful on Blu-ray. The look and sound are ideal in this format.

The extras are a mixed bunch with solid commentary from co-directors Musker and Clement, along with producer Peter Del Vecho. For interested fans, there are a series of deleted scenes that never got beyond the pencil test and there’s interesting discussion as to why each moment wound up excised. Magic in the Bayou: The Making of a Princess is a nice 22 minute making of featurette.  After that, though, the others are shorter and far less engaging, including The Return to Hand Drawn Animation, The Disney Legacy (which references the Nine Old Men but doesn’t name them all), Disney’s Newest Princess, The Princess and the Animator, Conjuring the Villain, and A Return to the Animated Musical. The exception being Bringing Animation to Life, where Clements and Musker delve deeper into the process.

The Blu-ray is rounded out with Art Galleries and an interactive game, What do you See? for the younger crowd.