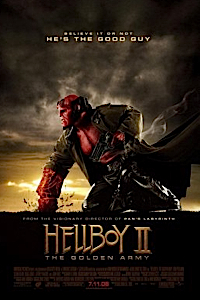 If there is one absolute statement that can be made about [[[Hellboy II: The Golden Army]]], it is that this is easily director Guillermo del Toro’s lightest and funniest film — which may just be its greatest downfall. If the first film were to be classified as a “horror/action with comedic relief”, this film is most definitely a “horror/comedy with action sequences,” and that could be what hurts the film the most.

The story picks up about a year from where the first film leaves off: the [[[B.P.R.D.]]] has grown, with the addition of Liz Sherman (Selma Blair), who is now Hellboy’s live-in girlfriend. Tom Manning (Jeff Tambor) is still in charge of the team and is trying his hardest (“trying” being the operative word) to keep it all a secret from the public. There’s all of this, and then there’s also an epic war being forged between a renegade elf prince and mankind.

The film starts off sweet enough, on a military base on Christmas during one of Hellboy’s adolescent years.  A cameo from John Hurt gets the audience excited right off the bat. Hurt then tells a young Hellboy the story of the first Human/Elf war. This is where we set the mood for the rest of the film. The story is told using computer-generated wooden dolls, rather than actual elves or humans. While Guillermo is known for his imagination with monsters and/or children, this may have been a bit much in the direction of puerility. Instead of giving the impression of a childhood story, the CGI comes across as sloppy and unfinished.

We then flash forward to today, where [[[Hellboy]]] and Liz are having another “quarrel.” One of the most prominent themes in this film is humanity and relationships. Hellboy’s maturity and leadership skills are constantly brought into question, which I feel hurts the character. Abe Sapien (Doug Jones) gets much more screen time, while still doing little or no actual fighting. The “love bug” bites Abe as well, as he falls in love with Princess Nuala, an Elvish princess, and the twin sister to the film’s antagonist, Prince Nuada.

The art direction and creatures in this film are steps up from the last time we entered this world five years ago. Seeing as how there was no need for an origin, del Toro was able to play more with the underground world and it’s inhabitants. There is a marketplace scene that’s reminiscent of the Star Wars

“Cantina” scene — just more horrifying. The use of traditional creature effects over CGI is also prominent in this film, as well as almost all of Guillermo’s films, and as usual, it’s fairly seamless. 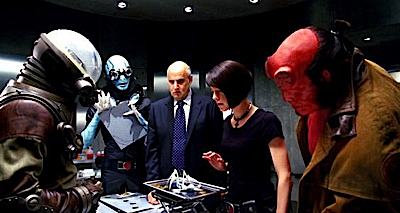 There is only one significant complaint I had about this film, and that was with the amount of humor in the film. At about the one-hour mark, it can be said that the film had almost the exact same mixture of comedy and action as Iron Man

, which is an amazing thing to accomplish. From there, things only get sillier, including a cartoonish fight sequence between Hellboy and a locker, and a musical number with Abe and Hellboy. These scenes would all be fine if they were to go out with a bang and a huge fight sequence, but because of the immense character development in the previous half of the film, the epic battle sequence only falls flat. Even the presence of Family Guy

’s Seth McFarlane as the voice of B.P.R.D.’s newest member, Johann Krauss, only makes the film seem funnier — something with which it didn’t need any help

With that said, there are some pretty great action sequences throughout the film, and if they weren’t bogged down with a downtrodden Hellboy complaining that everybody hates him, they would be almost perfectly placed. For example, there is a fight sequence between Hellboy and an earth elemental in the second act that would have made for an amazing scene were it not for the constant reminder that “Hellboy doesn’t fit in with the humans or the demons. He is an outsider.” This only served to continually bring the mood down and depower our hero. 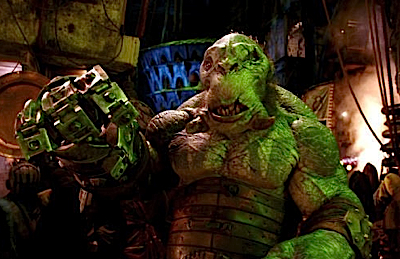 Overall, this is certainly a fun film, and keeps the audience entertained from start to finish. I only found the comedy to get a bit eye-rolling after the first hour, but it wasn’t for lack of interest — just ad nauseam wackiness. It is still safe to say, though, that [[[Hellboy II: The Golden Army]]] is a great reprise of our favorite characters and actors from the 2003 film.