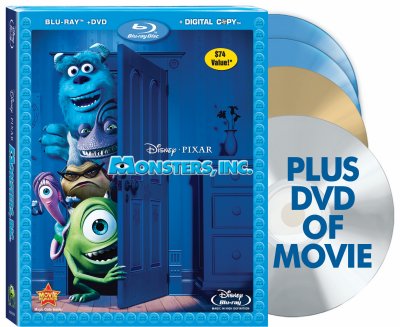 Pixar burst onto the scene with [[[Toy Story]]] and proved that they were the successor to Walt Disney Studios by providing heart-warming, funny family-friendly animation, using pixels instead of paintbrushes. They followed up with [[[A Bug’s Life]]], which was another success, and they came right back with [[[Toy Story 2]]] which was an expected smash.  The question was back then, how long could they sustain the hits and the level of quality. A lot was riding on their fourth release, Monsters, Inc.

, since it was to be their third original creation and a gauge of their long-term viability.

Well, we all know what happened. It and every subsequent film has been one hit after enough, proving Pixar was not only the real deal, but a successful font of new ideas. Disney clear had no choice but to advance their partnership by owning the company, which reinvigorated their own franchise characters.

is being released on Blu-ray this Tuesday clearly intended for holiday shopping, and comes in an assortment of flavors. The 4-disc set, sent for review, has the following elements: the film and extras on Blu-ray, a Blu-ray disc of even more extras, the movie on standard DVD and a digital copy. That’s a really impressive deal, if you own a Blu-ray player.

The fabulous movie looks and sounds even better on Blu-ray, the digital creations just as inventive and fun as always. The 91 minute story remains amusing with a lovable set of characters and full realized world of monsters, which required energy derived from children’s’ screams. Boo, the little girl accidentally in their world, could be a sickly-sweet character but instead looks and acts like a real 2-year-old, charming and frustrating all the way. The voice cast, headed by John Goodman and Billy Crystal, is top-notch and well picked for their parts.

But you know all that.

The movie disc comes with the previous DVD bonus material. The shorts For the Birds and Mike’s New Car; but new is a lengthy Filmmakers’ Round Table where four of the geniuses behind the movie, talk through their challenges and favorite parts. There’s also a preview of the Monstropolis exhibit at Tokyo Disneyland, the closest most of us will ever get to see the impressive looking ride.

The second Blu-ray has a few hours’ more fun starting with the interactive game, Roz’s 100-Door Challenge. By answering questions based on the film, it determines which job you are suited for. Don’t like the job, you try again.  There’s a nice tour of Pixar’s compound, dubbed the Fun Factory. Clearly, the imagery emphasizes the creative, goofy, and downright fun involved in the making any one film. On the other hand, the hard work and long hours brining the story and characters to life, is sadly underplayed. Everything on this disc is geared to demonstrating how Pixar works related to Monsters, Inc.  It’s a rich assortment of features for the fan.

The movie endures, a classic for families for generations to come and there’s no better way to preserve this than having this rich package of video material.