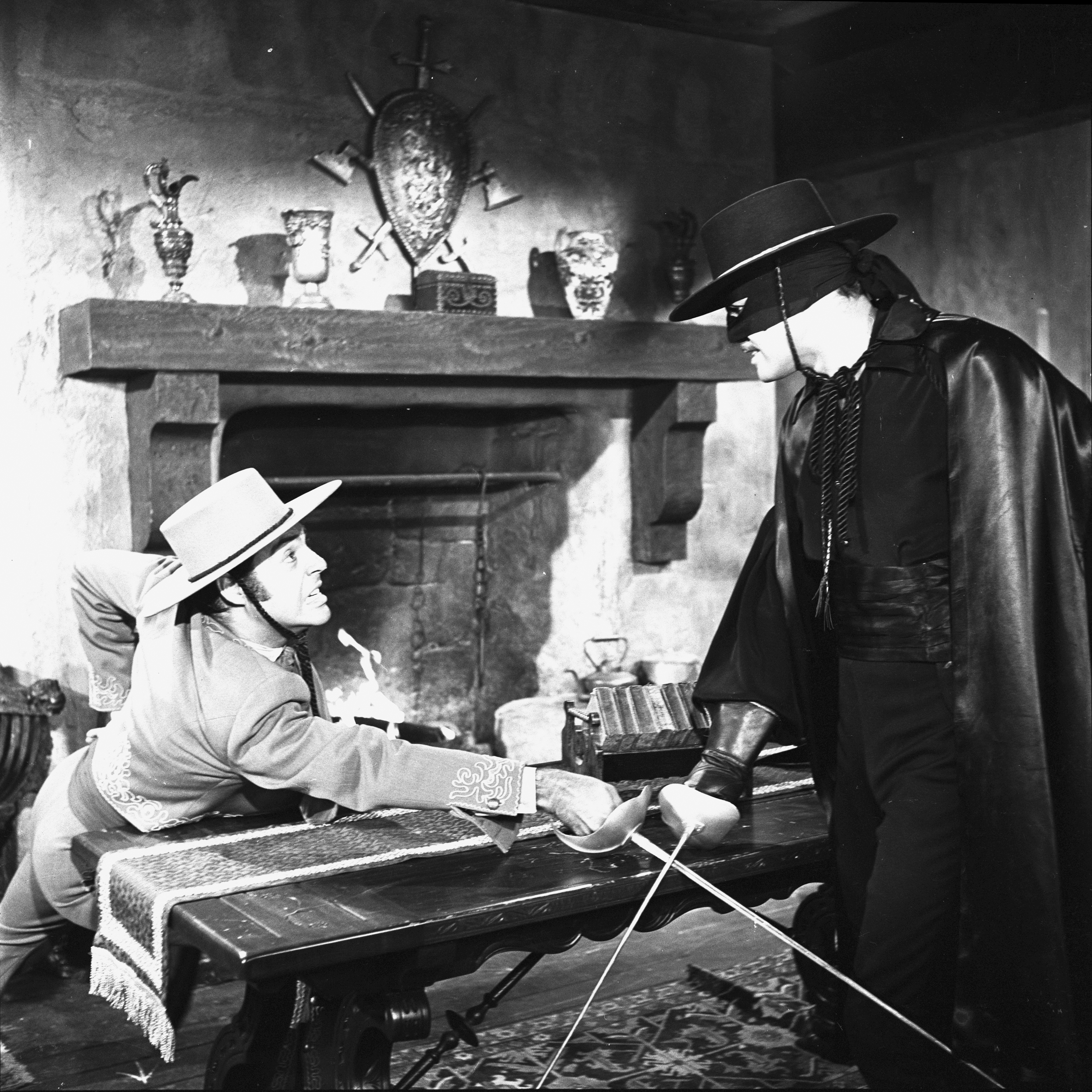 Walt Disney had a gift, an ability to take someone else’s property and recraft it for a modern audience. Just about every time he touched a fairy tale or legend, he struck paydirt.  Look what he did with Grimm’s fairy tales or A.A. Milne’s [[[Winnie the Pooh]]]. Largely overlooked these days is the incredibly popular 1950s television series based on Johnston McCulley’s pulp hero, Zorro

The black and white series, starring Guy Williams, ran a mere two seasons but spawned over 500 licensed merchandise items in addition to enjoying a long syndicated run in the 1960s and again after the birth of the Disney Channel. Back in the ‘50s, the season ran 39 weeks and a half-hour show actually had 25 minutes of story so there was plenty of material to recycle.

Fortunately, Walt Disney Home Entertainment noted the enduring appeal of the character and has this week released the complete run in two attractively packaged volumes. Both volumes are available in numbered limited edition tins that come complete with certificate of authenticity, label pin, black and white still of [[[Zorro]]], and a booklet detailing the contents.

Leonard Maltin, who grew up watching the series when it originally ran on ABC from October 10, 1957 through June 2, 1959, provides introductions to seasons one and two, providing some context and information that nicely sets the stage. The seasons nicely fit into five discs and both volumes contain a sixth disc with bonus material. 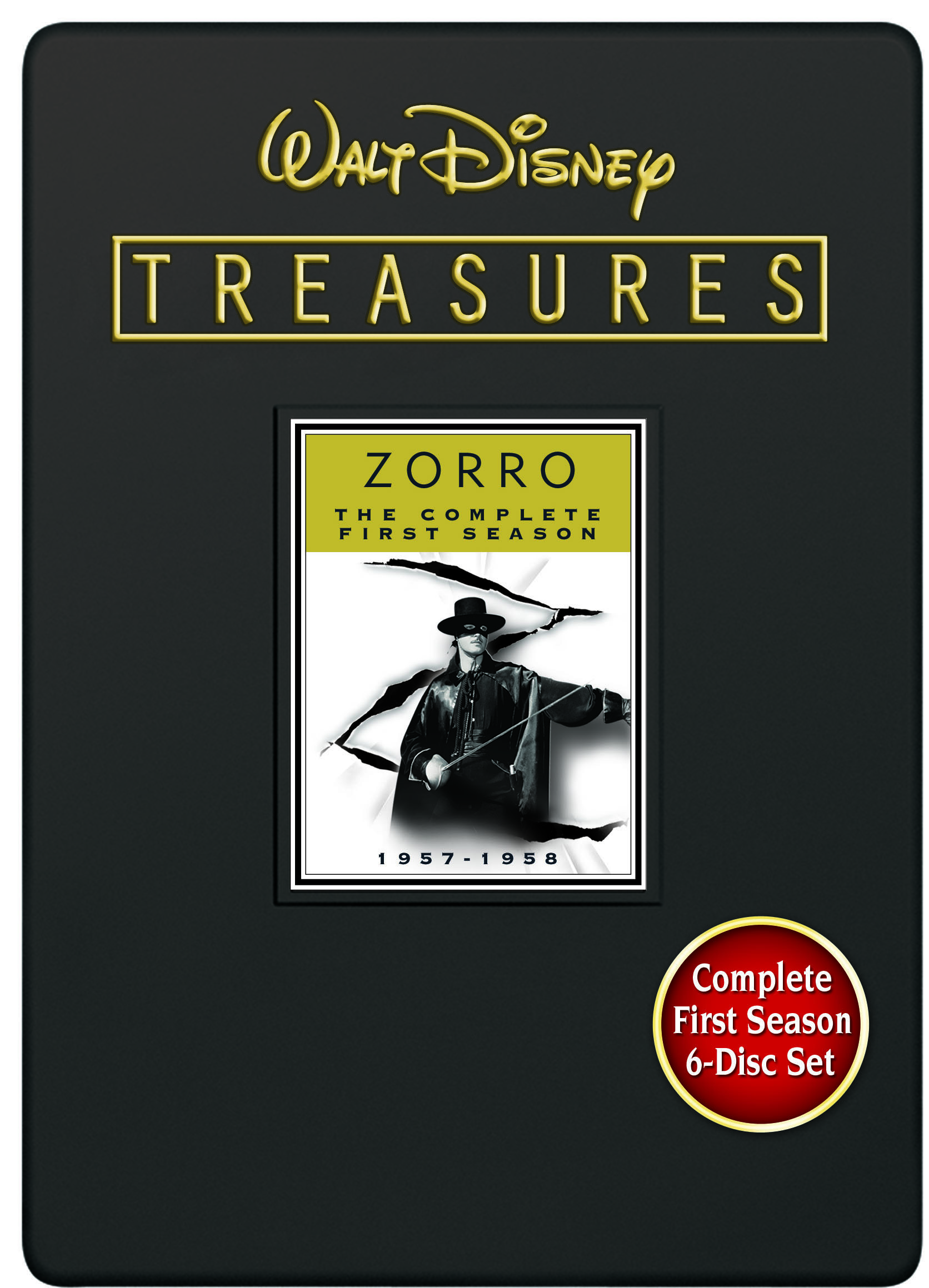 McCulley’s somewhat clunky prose style was full of ideas: that of a masked avenger rising to protect the citizens of the small town of Los Angeles in the early part of the 19th century. Taking a cue from the precedent set by Baroness Emmuska Orczy’s [[[Scarlet Pimpernel]]], introduced a decade before in 1903. Don Diego de la Vega decided he needed to play the fop so no one would suspect he was the black-cloaked fox known as Zorro.

The stories fired the imagination and were quickly adapted to screen, first in the silent films and then in the movie serials before it enjoyed feature film status. Along the way, McCulley actually incorporated some of the changes made for film into his prose. In 1952, Disney tried to acquire the rights and it took him until 1957 before it was a done deal. In September 1957, on his Walt Disney Presents,  Uncle Walt told stories to his Mousekteers on his fourth anniversary show and it was used to introduce Williams as Zorro, leading people to watch the show which debuted weeks later. 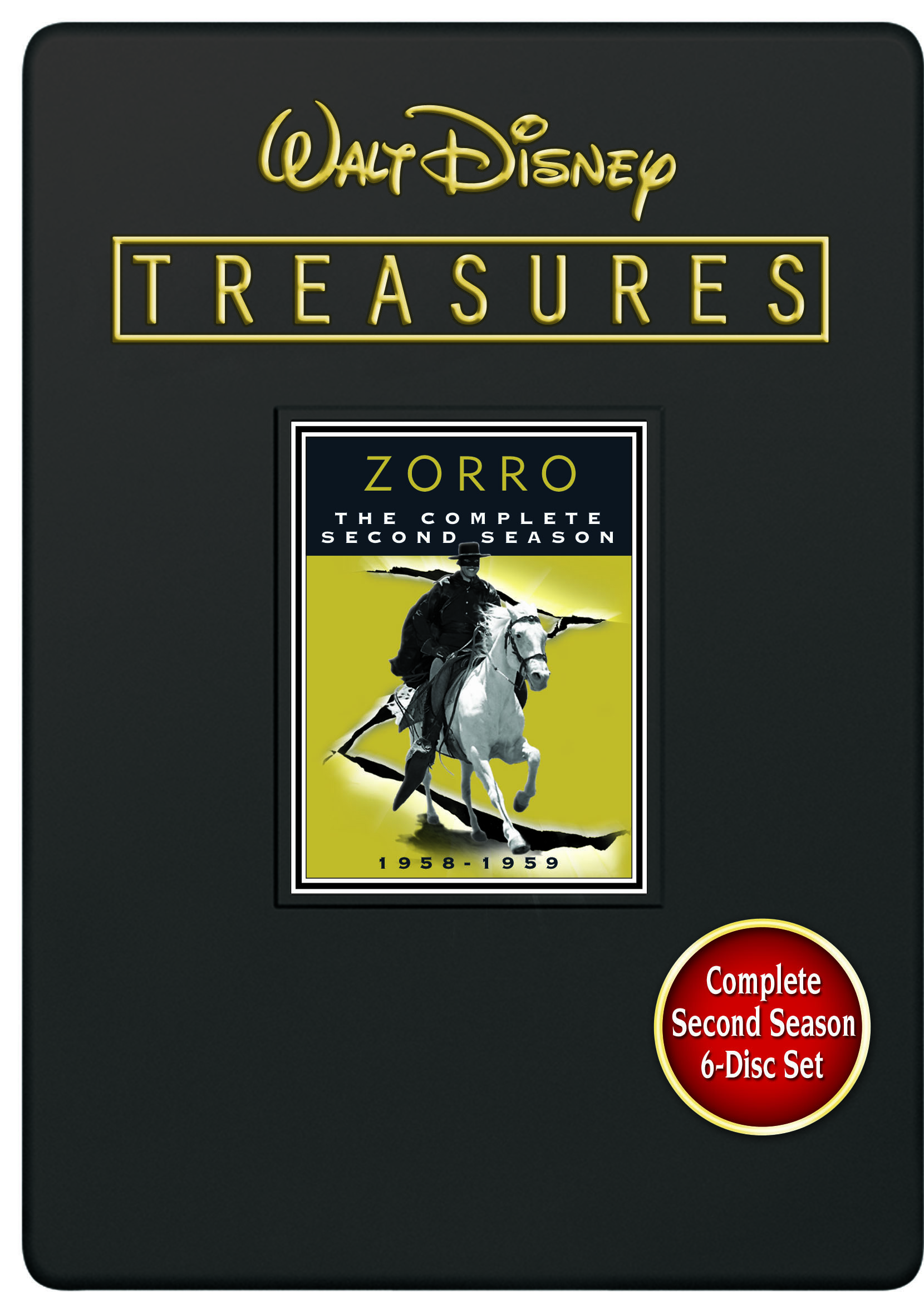 Several things made Zorro stand out from its prime time competitors. First, it had continuing stories, something no other drama dared try. Stories ran for multiple weeks with sub-plots playing out and things wrapped up only in the 39th and final episode of the season. The cast and status quo was allowed to evolve so in time, de la Vega’s father, Don Alejandro, learned of his son’s dual identity and became a willing co-conspirator in the battle for justice. The show was also unique in how it dealt with the Mexican experience when Los Angeles was still in Mexico and class issues remained a concern. Subtle, yes, but it was there and was a nice contribution to the race issue at a time when America was finally being forced to confront the matter of civil rights.

Another strength was the original music and scoring written by William Lava, another unusual element making the Zorro series unique.

Watching the episodes shows the attention to detail so the plots made sense, the sets were realistic, and there was a nice blend of character, action, and humor. These were truly family-friendly shows that never once talked down to the viewers. Williams was an ideal Zorro, comfortable as both Diego and the black costumed alter ego. He’s ably supported by the talented Gene Sheldon as the mute Bernardo. There’s genuine affection between the two. Similarly, Henry Calvin’s Sergeant Demetrio López García is terrific comic relief, a man working for evil leaders but is himself a gentle soul just doing his duty.

The second season largely shifted its focus further north, setting the majority of it tales in  Monterey, the colonial capital, where Zorro dealt with thieves who tried to rob a supply ship by regularly diverting it. The character of Ana Maria Verdugo was introduced as a romantic interest, setting up a rivalry between Diego and the amusing Ricardo del Amo (Richard Anderson) while she had eyes for the masked rider.

It’s fun seeing the great Latin American actors of the day appear in episodes along with other character actors. Rita Moreno dances in one story while a pre-Joker Cesar Romero shows up for an ac as Diego’s troublesome uncle Esteban de la Cruz. A three-parter in season two guest starred Annette Funicello, who had such a crush on Williams that Disney had her written into the show as a sixteenth birthday present.

The ratings were strong and ABC wanted a third season. Disney wanted to begin producing the show in color but the young network balked and in the end canceled the show. Scripts which had already been commissioned which Disney had edited into hour-long stories and reunited the cast. The four hour-long specials ran in 1960 and 1961, raising the Walt Disney Presents ratings each time they ran. By the time the two sides settled their legal feuding, the network oddly decided interest in the hero was waning.

The other bonuses on disc one is [[[The Life and Legend of Zorro]]] (12:26), the history of Zorro from his pulp debut through the Disney series and an excerpt from the Disney show teasing the Zorro series.

Volume two has, in addition to the two extra episodes, [[[Behind The Mask]]](7:52), profiling Guy Williams, and Maltin visiting the fabled Walt Disney archives (10:55). Accompanied by Williams’ son, Guy Jr., Maltin walks us through the preserved and somewhat restored costumes that show the rich colors and styling. Some of the TV-themed merchandise was also explored.

While most ComicMix readers know and adore the Antonio Banderas version, you can’t go wrong with these two sets, filled with action, daring-do, and fine performances. Disney is to be congratulated on the overall packaging and presentation, truly making these Walt Disney Treasures.