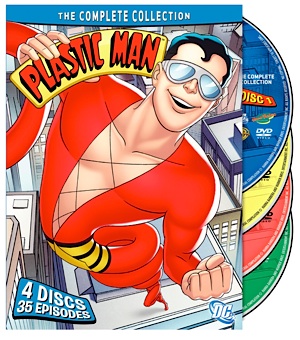 There are many reasons why Plastic Man has endured as a comic character starting with the imaginativeness of Jack Cole’s stories. He was the first elastic hero. The first hero who started life as a criminal only to reform when he inherited his powers. He was also one of the few truly amusing animated series from the 1970s.

[[[The Plastic Man Comedy/Adventure Show ]]]snuck in at the end of the decade, lasting two seasons from 1979-1981, and was a fun offering from Ruby-Spears. The 35 solo Plastic Man adventures have been collected by Warner Home Video in a four disc set, now available.

While Plastic Man: The Complete Collection

is the title, it’s not entirely accurate since the Comedy/Adventure Show featured segments dedicated to Baby Plas, Plastic Family, Might Many & Yukk, Fangface and Fangpuss, and Rickety Rocket and none are collected here.

The series, which benefitted from the writing talents of comics veterans Mark Evanier, Steve Gerber, Roy Thomas, and Norman Maurer among others, was playful in a way most other Saturday morning fare was not. The show arrived at a time when networks were overly concerned with cartoon violence and how viewers may try and imitate the antics seen on screen. As a result, their other recent offerings of Saturday morning cartoons from the 1960s and 1970s contained a ridiculous warning that they were not suitable for children. Tellingly, this collection does not include that warning.

While the animation team wanted to emulate Cole’s manic style, ABC insisted on a fresh approach which unfortunately left Plas saddled with the fawning girlfriend Penny (who subsequently married him and mothered Baby Plas) and Hula-Hula, the comedic sidekick in the Woozy Winks role. The rotund Hawaiian was given Lou Costello’s character and vocal characteristics which softened his buffoonery.  They globe-trotted from case to case aboard their jet, directed by their Chief, an attractive older woman who barely tolerated her ductile detective.

Each exploit pitted the trio against dastardly villains, most of whom desired wealth and power although a few had motivations that smacked of social relevance such as the Weed in the very first episode. The foes are nicely varied and interestingly, Toyman arrives for repeat appearances which is odd considering they never fought in the comics. In fact, only two foes from Plas’ comic books are used: Dr. Dome, introduced in the short-lived 1960s series, and Carrot Man, who debuted during his more creatively satisfying series from the mid-1970s.

Like Cole’s original stories, Plas reshapes himself into a variety of objects to go undercover and viewers see him since he retains his red and yellow costumed appearance. He never takes things too seriously and has some good quips to keep things light.

The episodes are supplemented with two special features. The first is a 14 minute mini-documentary on the character’s history and appeal. In addition to the usual talking heads of Jerry Beck and Mark Evanier, ComicMix’s own Alan Kistler contributes many cogent thoughts. The other extra is the unaired 10 minute pilot produced for the Cartoon Network in 1996 by a new generation of animators, including DC veteran Stephen DeStefano. It’s a very different look but equally amusing tale and one wonders why it was not picked up.

If this is the Plastic Man you grew up watching, then this is the DVD set you’ve been waiting for. If you’re unfamiliar with the character, I strongly recommend the DC Archives volumes reprinting the Cole stories which remain inventive and fun.