Review: ‘Knights of the Lunch Table – The Dragon Players’ 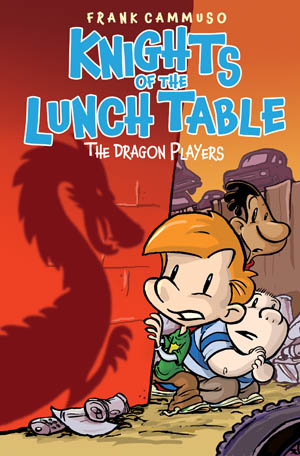 Knights of the Lunch Table: The Dragon Players

The pee wee population of Camelot Middle School is back in the second volume of the [[[Knights of the Lunch Table]]] from Frank Cammuso. The series, launched by Scholastic’s Graphix imprint last year, takes the broad strokes of the Arthurian legend and reimagines everything from a junior point of view. Our protagonist is Artie King and his two best friends are Percy and Wayne, all trying to survive the hostile environment that can be early adolescence.

While unrelated to Jolly R. Blackburn’s [[[Knights of the Dinner Table]]], Cammuso’s junior adventures are no less enjoyable. [[[The Dragon Players]]], now on sale, finds science teacher Mr. Merlyn easing Artie towards entering the robot dragon competition. While reluctant to participate, he agrees since Wayne owes Principal Dagger $300 for a new windshield and the competition’s prize just happens to be that exact amount.

With that as a launching point, we see a cleverly constructed plot that involves the students and the faculty. Along the way, the pitfalls of school life are clear with the boys being bullied by the enormous Joe and Artie struggles to survive in the house with his older sister Morgan.  The characters act their ages with their emotions ranging all over the place and in need of some wise counsel. Artie can get some tips from his magic locker, but it falls to Merlyn to gently point him in the direction of doing what is right, not what is easy.

Cammuso’s art and color make the main characters appear a little younger than they should be but he fills the pages with nice details and keeps things moving at a nice clip. The climax, at the competition, is a little rushed, but everything is neatly tidied up by the final page.

Scholastic recommends this for ages 7-10 and that sounds about right. The readers should find the characters fun and relatable while Cammuso’s story imparts some good lessons. These annual offerings are most welcome.