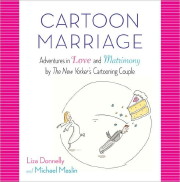 Cartoon Marriage: Adventures in Love and Matrimony by The New Yorker’s Cartooning Couple

Donnelly and Maslin are both professional cartoonists – both regularly appearing in The New Yorker – and have been married for twenty years. [[[Cartoon Marriage]]] is their paired look at modern relationships, consisting of two hundred reprinted New Yorker cartoons – divided roughly right down the middle – and some new comics-format pages to explain and introduce each section.

(The two of them have collaborated on two previous books – [[[Call Me When You Reach Nirvana]]] and [[[Husbands and Wives]]] – the latter of which sounds very similar in scope and theme to this new one. But both of those are well over a decade old, so presumably they have a lot more marriage to reflect on now – as well as more cartoons to choose from.)

The book itself opens with a four-page comics introduction, “Here’s the Story of Us…,” and then is divided into twelve loosely-themed sections, each with a single page collaborative comics page to introduce it. The comics pages are fun, and anchor the book, keeping it from being just another collection of cartoons. (The cartoons are funny, and well-chosen, but just sticking a bunch of cartoons between covers doesn’t necessarily make them a book – Cartoon Marriage is a book.)

Cartoon Marriage is not purely a “marriage” book; it’s a book mostly of cartoons of relationships between men and women – what Thurber called the eternal war. There’s one section of cartoons about kids and one of pets, but two about sex…and the rest are about various aspects of “talking about the relationship.” It’s obviously primarily for people – like me – who enjoy and appreciate New Yorker-style cartoons. If you like that kind of thing, this is a great collection of witty cartoons by two of the best cartoonists working today.