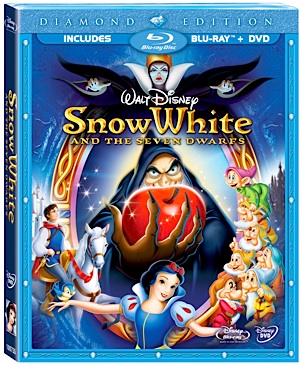 Truth be told, I was never a big fan of Snow White and the Seven Dwarfs

. A lot of that has to be ascribed to my dislike of Adriana Caselotti’s voice as the title character. The songs remain wonderful and the animation a delight. I do have to give Walt Disney a lot of credit for ignoring the nay-sayers who felt people would never sit through a feature-length animated film. Of course back then, people were still figuring out what audiences would or would not do. Back then, no doubt, some still regretted adding sound.

The basic children’s fairy tale was simplified for the 1937 film, starting with the excising of Snow’s mother in favor of just presenting the wicked stepmother. When the Queen tries to do away with Snow White, it took her three attempts which Walt cut down to just the poisoned apple. On the other hand, Walt’s idea of having the Prince’s kiss wake her up is superior to a piece of apple being dislodged from her throat. It would have been nice if the Queen was forced to watch her step-daughter happily marry the Prince, wearing red-hot iron shoes as her punishment.

Wisely, Walt simplified the story to fit it in the constraints of then-current film-making. Additionally, he played up the part of the Seven Dwarfs, giving each a distinctive personality that have become memorable. In the story, after she sought shelter in their home, they agreed to let her stay with them in exchange for her services as cook, maid, and, laundress.  Instead, Snow here takes it upon herself to do the cleaning first, ingratiating herself to the dwarfs before meeting them. Of course, that allows for the animators to let the forest creatures come to her aid set to song.

Still, it’s a charming story, simply told; an experiment that paid off handsomely, catapulting Walt’s studio ahead of all other animators.

Now, the studios’ crown jewel is coming to Blu-ray, going on sale tomorrow. The Blu-ray edition has two discs, one for the film and one for the copious extras. Also included is a standard DVD version so this combo pack is the one to buy for now and the future. While the standard disc contains extras, the supplemental Blu-ray disc has them and much more.

The original film has been meticulously restored and the lush color and design has never looked better. The sound is crisp and the imagery a wonder. Clearly, this is the best the film has ever looked.

Blu-ray owners will enjoy having the Magic Mirror act as the Disney Smart Navigation interface. The mirror guides you through both discs and has enough intelligence ot know if you’ve played this before and whether to resume where you left off. BD Live adds to his functionality and practical use such as time and weather information.  If you don’t like the letterbox bars, you can switch to Disney View which features new art extensions prepared by Toby Bluth, complete with some new information about their creation.

Extras include Backstage Disney: Hyperion Studios, an exhaustive look at the original home for Disney and his animation team complete with virtual tour of the first house that Walt built. A ton of archival material has been unearthed for presentation to diehard fans with every department well represented. Along the way you will watch two Silly Symphony cartoons from the early days and be treated to commentary and tours from current animators including Pixar’s Andrew Stanton. You learn much about how it all began through a series of short features but it requires effort to poke and prod through every doorway and department within the virtual studio.

Snow White gets its due in “The One That Started It All” that offers up some new information and insights.

One of the more interesting featurettes is Snow White Returns. Recently uncovered archival material indicates Walt may have been toying with a sequel and we spent nearly 9 minutes reviewing the data. Deleted scenes include the “Soup Eating Sequence” and the “Bed Building Sequence”.

Resurrected from previous editions are “Dopey’s Wild Mine Ride” game, “Heigh-Ho”, a karaoke sing-along and “Disney Through the Decades”, “Animation Voice Talent” (featuring Caselotti). Unfortunately, some of the 2001 edition features are absent.

This belongs in every videophile’s library and under the Christmas tree of children from coast to coast. The charm and whimsy endures as witnessed in this beautiful collection.