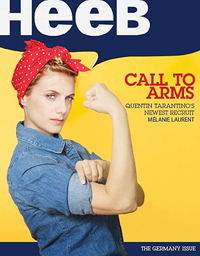 For those not in the know, Heeb Magazine is the cleverly titled magazine for mostly young people (and me) of Jewish, and generally Ashkenazi, descent. It’s clever, relevant, and not terribly religious. They regularly cover the comics scene; I know of at least one comics shop that carries the magazine: Comix Revolution in Evanston Illinois.

For the past several years, our friends at Heeb have been ranking their favorite
graphic novels on an annual basis – defining “annual” by the Hebrew calendar.
Ergo, here’s their Top 10 list for the year 5769. More info here at the Heeb site.

Hmmm… Do you think we should tell them that John Gaunt is
Jewish?