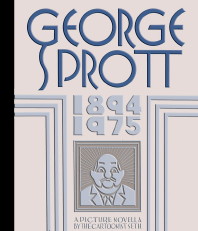 Comics very, very rarely tell stories about old, fat, boring
men, which most people probably don’t think is a problem. But no art form can
ever become mature if it ignores large swaths of the world, and it’s
indisputable that our world is filled
with men who are old, or fat, or boring, or (even worse) all three at once.
Maybe none of us would ever want comics to be only about the Sprotts among us, but the fact that there’s
now room for comics about them is a good sign.

[[[George Sprott: 1894-1975]]] is an expanded version of a story that originally appeared from late 2006 through March of 2007 in single-page installments in the [[[New York Times Magazine’s]]] “Funny Pages” section. (Which, by the way, seems to have quietly ended with
Gene Luen Yang’s story “Prime Baby” a few months back.) In the Times serialization, each installment of Sprott was a single large page, essentially a chapter of
the longer work. Those pages appear here, in the same sequence and not apparently
changed, but they’re surrounded by new work – both Seth’s usually impeccable
(if chilly, and in his typical blue tones) book design, with illustrations and
decorations, and some new comics stories to expand that original story. Primary
among the new work is a sequence of eight stories – each one three pages long, and
each taking place on one particular day, in a different decade over Sprott’s
long life, arranged from 1906 through 1971 as the book goes on. There’s also an
impressive six-page fold-out, near the end of the book, that looks to depict
Sprott’s scattered thoughts as he died. On top of those, there are short
introductory and ending pieces: the first is thematically interesting, if
mostly wheel-spinning, while the new two-page “Sign Off” from the fictional TV station that Sprott worked for is another slab of very provincial Canadian
bacon added to a plate already swimming in maple flavoring and Timbits.

The story of George Sprott is slow and quiet, focusing primarily on his death and old age –
Sprott himself had been a TV host and lecture speaker for about forty years at
that point, roughly half of his life. His TV show and lectures were all based
on a series of scientifically dubious trips Sprott had made to the Arctic
during the ‘30s, primarily as a money-making scheme to exploit boys willing to part with their nickels to get crudely hectographed dispatches from the frozen north. But those lectures and TV shows aren’t shown in the book directly – we hear about them, and are told how dull and tedious they had become by 1975 (and decide, perhaps, that they were never all that interesting to begin with), and we occasionally see Sprott introduce them, but the core of his late professional life remains off the page.

George Sprott isn’t
essentially about George Sprott the individual; he stands in for all of us, for
anyone who accomplished something in his life (if not what he expected, or
really wanted to) and is looking back at that life, or having someone else look
back after his death. What makes that work is the fussy, ruminative tone Seth
takes in the ever-present narration; we can never forget that we’re looking at
the last hours of an old man, and looking back on his life from long afterward.
It’s true that no life can take its real shape until it’s done, but Seth also
deliberately confuses the matter in some of the early pages, throwing out red
herrings and suppositions to leave those essential questions – who is George Sprott? What did he do? – as murky and
unknowable as possible.

Sprott’s life, as I’ve alluded, is very Canadian, in that
low-key, minor-league kind of Canadian-ness that Seth excels at depicting: Sprott
went North…but for commercial reasons. Those trips made him successful…but only
much later, and almost incidentally. He was a big star…for a while, on a small,
minor TV station, doing something that became blander and less interesting to
his audience as his life went on. Seth’s books are all about that kind of
Canadian success – success at something almost not worth doing, or forgotten,
or just far over at the margins where no one notices. By those lights, Sprott
is the great Canadian success story, and so he’s forgotten almost as soon as he
dies.

George Sprott can’t
quite achieve the unity of effect and purpose of Seth’s great graphic novel [[[It’s a Good Life, If You Don’t Weaken]]], due to its original publication constraints, but it substitutes a whirling, holistic
view of its main character for the tight, unadorned narrative of [[[Good
Life]]]. The large pages of George Sprott also give Seth’s creations more room
to breathe and spread out, particularly in that fold-out section near the end. Sprott might end up being Seth’s second-best book to date –
and I’m not entirely sure of that judgment, so soon – but it’s easily one of
the best books of this year.