Disneyfication Wave, Plus One Day 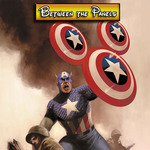 How big a deal was it? I don’t think Marvel sent out a single press package today hyping their comics. Usually, we get two or three of them a day.

The Beat has an excellent roundup of what we do and don’t know by now. But they don’t say much about other reactions. So what does the Internet think? Twitter, as might be expected, has gone crazy with the #disneymarvel and #disneybuysmarvel hashtags. Reactions can be broken down pretty easily into three categories, in order of increasing rarity:

People Trying to Be Comedians

poohbear151: So is everyone ready for the spider-man/fantastic four/x-men/high school musical crossover event?

smmEBob:  Buzz Lightyear and the Guardians of the Galaxy

Professionals Trying to Be Comedians With More Success

Jeff Parker (Writer, Agents of Atlas): Please, will someone draw MODUCK (NOTE: Ryan Dunlavey did, as did Chris Samnee.)

Warren Ellis (Writer, Astonishing X-Men): so I got this phone call from Joe Quesada and it was just the sound of him rubbing himself with money and now I am confused

(Broken Frontier has a strong round-up of other professional’s reactions in somewhat longer form.)

C.B. Cebulski (Marvel talent liaison/editor/writer) Allow me to reassure you right now, guys, that Marvel’s going to continue to produce great comic books the way we always have.

Joe Quesada (Marvel Editor in Chief) If you’re
familiar with the Disney/Pixar relationship, then you’ll understand why
this is a new dawn for Marvel and the comics industry.

Marv Wolfman: Because I was both the Editor-in-Chief of Marvel as well as one of the
two founding editors of Disney Adventures Magazine, I’ve already gotten
numerous phone calls, including one from Forbes Magazine, asking what I
think about Disney buying Marvel. The easy answer is – nobody knows.
Certainly I don’t.

We’ll keep more stuff coming– we don’t think this story is going away any time soon.