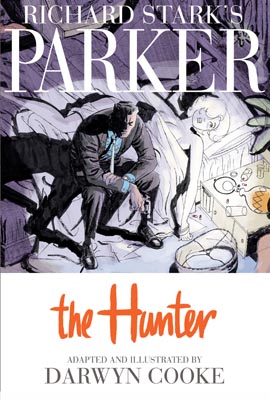 Richard Stark’s Parker novels come out of a particular
period in literary history: the heyday of the disposable paperback for men.
Paperbacks had appeared in their modern form just before WWII, and servicemen
got used to carrying small paperbound books in whatever pockets they could jam
a book into. The boom continued through the postwar years, with a flood of
short thrillers, detective stories, and soft-core porn – all to stave off
boredom for a man waiting for dinner time on a business trip in some hick town,
or hanging out at the PX on his army base, or riding the streetcar home at
night.

[[[The Hunter]]] was
published in 1962, at the height of that boom – a good decade before the ‘70s
taught publishers that women were even more dependable consumers of paperbacks,
and the long shift to romances and their ilk began. At first glance, Stark’s
hero is right out of the mold of the great hardboiled Mikes (Hammer &
Shayne) – tough, violent, single-minded, implacable. But Parker was less
emotional than the usual hardboiled hero – cold where they were hot,
calculating where they were impetuous. Parker could kill when he had to – and he
did it quite a bit – but he never killed for fun, or just because he could. As
the Parker novels went on he avoided killing as much as he could, simply
because deaths attract more attention than he wanted.

Hardboiled heroes came from both sides of the
law – Mike Shayne and Mike Hammer were detectives, but there were plenty of
law-breakers before Parker, from writers like David Goodis and Jim Thompson.
They usually weren’t series characters, though: Parker’s amoralism went beyond
his own actions to his world, and his stories told how a master criminal could get away with it – if he was smart and tough
enough.

The Hunter started
off with Parker in a bad situation, and showed him working, step by careful
violent step, to get back his equilibrium and go back to his previous life
after a double-cross left him near death, penniless, and on the wrong side of
the continent. It’s never that simple to go back, though – even for someone as
willing to do whatever it takes as Parker is – and his actions in this book
reverberated for several novels afterward.

And so the Parker novels went on for a decade after The
Hunter, with one or more a year, and even
spawned a shorter spin-off series about Alan Grofield, an actor/criminal
associate of Parker’s. But then they stopped with 1974’s[[[ Butcher’s Moon]]] and the Richard Stark name wasn’t seen in bookstores
for a quarter-century. (Of course, Stark was openly known by then as a
pseudonym for Donald E. Westlake, whose career – occasionally with work as
gritty as Stark’s, such as his Oscar-nominated screenplay for [[[The Grifters]]]
and the great black comedy [[[The Ax]]], but usually in a lighter vein, as with his novels
about the unfortunate criminal Dortmunder – was continuing strongly throughout that
time.)

Stark and Parker came back about a decade ago, after
twenty-three years away, with 1997’s [[[Comeback]]], and Parker hadn’t lost a step – or gained an ounce of compassion.
(And that’s just as it should be.) Seven more novels followed before Westlake’s
unexpected death last New Year’s Eve ended the Parker series forever.

But even the modern Parker novels take place in a world more
like the ‘60s than the Internet Age – Parker doesn’t use cellphones, and he’s
still mostly stealing payroll from armored cars or knocking over banks. His
world isn’t frozen, precisely, but it is anchored in the ‘50s and early ‘60s –
when men always wore suits and women always wore dresses, and both knew exactly
how they should and shouldn’t act. Westlake set his new novels in depressed old
industrial towns off the backroads of the northeast, places that would feel
left behind, to keep Parker from being an anachronism, and it generally worked –
the new novels were as tough, as smart, and as successful as the previous
string, though the new books had a much stronger through-line, with one novel
usually leading right into the next without a break.

Now we do have something like a new Parker book, since
Darwyn Cooke has adapted that first Parker novel into graphic form, turning two
hundred pages of novel into a hundred and forty pages of comics. (Well, isn’t a
picture worth a thousand words? Then, at an average of four panels to the page,
Cooke clearly blows past the novel’s eighty-thousand-or-so words.) And his instinct
was to keep The Hunter in its period, to
explicitly make it a historical story set in 1962, and that was exactly the
right instinct, since it’s a story of its time, full of people with the
sensibilities of the era and the criminal organizations to match.

It was the right decision, because doing it otherwise would
have caused more problems, and entailed large changes to the story…but it does
give The Hunter a faintly quaint air. 1962
was a long time ago, and the way people lived and thought then is getting to be
foreign to us now – and that works against the toughness and casual violence of
Parker. We see this story through the lens of time, and know that this world
has been gone for a long time – longer, even, than many of its readers have
been alive.

Cooke’s style is distancing as well, all blue washes and
borderless panels – it looks like
something from 1962, the storyboards for a TV show that Texaco refused to back
or sketches for an ad campaign that never came off. Giving this story pictures
dates it much more strongly than leaving it purely in words. It’s a very
appropriate style for the story, and it seamlessly brings back the world of
1962 in all of its details…but that’s the unfortunate problem. Parker should
never feel quaint, should never look like the last remnant of a previous age –
but he does, here.

Don’t get me wrong: Cooke’s The Hunter is an impeccable retelling of a great noir novel, and Cooke handles the violence very well,
while still avoiding seventy years of comic-book “fight scene” clichés. He does
everything right, but the end product is inevitably distance and dated, like a
museum piece rather than something vital and new. I don’t know if The
Hunter could have been adapted in a way
that wouldn’t leave it feeling like a flashy classic car – wonderful and
dangerous in its day, but unthreatening now – so this could be a pitfall that
never could have been avoided. And The Hunter does read like a great noir graphic novel from 1962, if such a thing could have
been created at the time. It just doesn’t feel like something new in 2009.

Andrew Wheeler has been a publishing professional for nearly
twenty years, with a long stint as a Senior Editor at the Science Fiction Book
Club and a current position at John Wiley & Sons. He’s been reading comics
for longer than he cares to mention, and maintains a personal, mostly
book-oriented blog at antickmusings.blogspot.com.