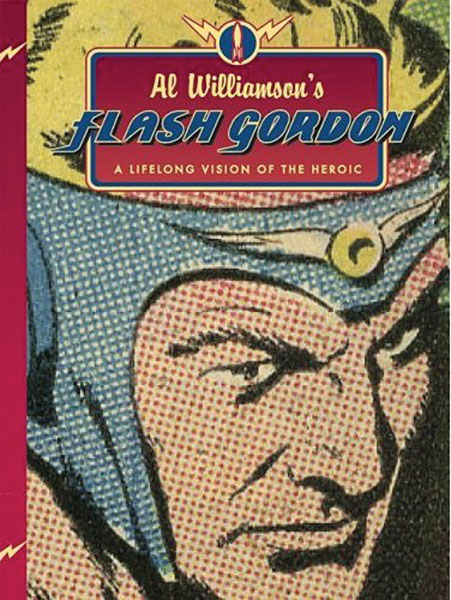 Al Williamsons Flash Gordon: A Lifelong Vision of the Heroic

While Al Williamson did not create the legendary science fiction character, in many ways he inherited Alex Raymond’s artistic legacy. The artist was born in 1931, three years before [[[Flash Gordon]]]memorably hit the Sunday newspapers.

Raymond is considered one of the finest illustrators to work in syndicated comics, along with Hal Foster, with a photorealistic style that brought his world of Mongo and its varied denizens to life. While Buck Rogers was the first SF strip, Flash Gordon was the best as the stories were epic in scope. The landscape of Mongo was unlike any realm seen in comics before and through the years that special feeling evaporated in the hands of others. Until Williamson.

In 256 pages, we are treated to the three stories produced for King Comics in the 1960s, the short-lived imprint from King Features Syndicate in addition to the his adaptation of the unfortunate 1980 film that looked better than it played. There’s also Williamson’s last major series work, the miniseries produced for Marvel in 1994. The King material is exceptional because it was the first time original material had been produced for comics with the characters actually resembling their strip origins . It’s lush and fast-paced with Williamson actually writing the first story. His long-time collaborator, Archie Goodwin, one of the most respected people in the field…ever, wrote several stories and Larry Ivie also contributed a tale.

Williamson’s style was very much like Raymond’s and his settings and characters felt just right. The deering-do is quick-paced and while the stories tread familiar ground, they are still head and shoulders above much other science fiction in comics. The three stories, brief as they were, earned him the National Cartoonist Society’s Best Comic Book Cartoonist award. His movie adaptation didn’t win awards but earned him a new generation of fans who may have only known his name in association with the legendary EC Comics.

The over-sized trade paperback is largely in black and white,
allowing us to see Williamson’s crisp renderings and how his style was
largely unchanged through the decades. The stories are fast-paced with
just enough of a hint of characterization to keep things interesting.
Back then, in-depth exploration of their feelings and relationships was
unheard of so Flash was front in center while Dr. Hans Zarkov provided
technical support and Dale Arden either monitored or was captured. The
villains were to be hissed at and the fantastical landscapes and
creatures to be marveled.

Even in the 1980s, when he wrote and
drew the Marvel mini-series, the story moved along traditional lines.
Williamson as a writer is serviceable, following Raymond’s breathless
storytelling to keep things moving and get our heroes into one scrape
before moving on to the next. Everyone makes an appearance and his
consistency in their portrayal through the years is a joy. If anything,
his women got more sensuous as time went by but his men remained heroic.

The
book is supplemented with numerous detailed drawings, personal
drawings, studies and unfinished work. In color are four custom stories
he prepared for Union Carbide, using Flash to help sell their products
to the trade. This is the most complete Flash Gordon collection a fan
can ask for.

Peers hold Williamson in high enough respect that
this book features essays from Mark Schultz and Sergio Aragones. The
former provides the commentary throughout the book and as an artist, he
explores when Al’s work was at is strongest and when it began to show
signs of age. He put everything in a nice historical perspective and
tempers his praise with a critical eye.

If you like Flash Gordon or Al Williamson this is a Must Have book for your shelf.