Will Your Local Police Warn You When Zombies Attack? 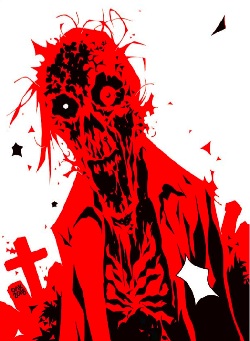 These days, it seems like there are zombies no matter where you turn.

Whether you’re driving near Austin, browsing your local bookstore or approaching celebrities in airports, they’re shambling towards you. Groups like Zombie Squad have helped to bring the impending zombie crisis… I mean, the public fascination with zombies… into focus for a good cause, by holding “zombie walks” for charity and blood drives.  So it is not very hard to believe that people might be concerned about marauding zombie hordes.

The question then becomes: If marauding zombie hordes descend on major US cities, what will we do? Zombie evacuation planning has become a recent favorite party activity around the world. Friends will get together and decide where to go and how to get there, who to take and who to leave behind.  Some companies are cashing in on these preparations by offering missile silos converted into homes, and there are several sites like zombietools.net that have a more hands-on approach to the Zombie Apocalypse.

Still, if zombies are shambling soon to a neighborhood near you, how do you know? Well, if you live in Boston, check the Boston PD’s Twitter feed. Recently, the department made internet history when they tweeted that they would inform the public if there were a zombie attack. This got me thinking: would anyone else?

I embarked on a mission to discover which US cities would inform their citizens of impending zombie massacre. Most of the cities I tried to contact ignored my calls and emails, but a few actually took the time to talk to me. Since I live in New York, the NYPD was my first call. I got patched through to their media relations department. I apparently reached them on a bad day, because my first question (to confirm that the NYPDNEWS Twitter feed was official) annoyed the officer I spoke to. Needless to say, I got an earful when I asked about zombies. New York isn’t going to tell you about zombies, but if you point out that Boston will, you may be told “this isn’t Boston, Lady. This is New York. We don’t talk about that sort of thing.” You’ll probably be told some other things, too.  I know I was.

The next major metropolitan police department that was willing to take my call was Miami. The officer I spoke to was incredibly polite and asked a lot of questions to make sure she was clear on what I was talking about.  I explained what I meant by zombies and she took a deep breath and asked me if I was playing a joke on her.  I assured her that I was not, and was just interested in knowing how major police departments would respond in the event of such a crisis, and that I wanted to know if they had Twitter (they don’t). She was very kind and said that she couldn’t speculate on things that were fictional because they dealt in reality. I then asked for a hypothetical response and she said “I’m sorry, we really don’t handle anything like that in our department.”

After more failed attempts to reach anyone, and having a lot of fun trying to navigate the automated phone system for the Atlanta PD, I managed to get through to the media relations department in Los Angeles. The LAPD is working on getting Twitter, but they do not have an account as of yet. I had a lovely conversation with the officer I spoke to there. Like the officer in Miami, she asked many questions to be sure of what I meant by zombies. She didn’t laugh at me, and she treated me with respect.  This is what she told me about how the LAPD would deal with a zombie attack: “We deal with factual information, things we can see. Nothing is ever assumed. There would be an assessment… Our goal is public safety, and if there was a genuine threat, we would definitely alert the public!”

On the email front, I only received one reply. The Las Vegas PD has a very user-friendly layout to their website, and they are on Twitter as LVMPD. The email I received was from a very kind sergeant named John Loretto, and even though his ultimate reply was “We are not going to entertain your request for comment,” he did take the time to write back to me, which is more than I can say for most of the cities I tried to contact.

So, if you live in Boston or Los Angeles, you would likely be able to receive a tweet warning you of an undead uprising. Chances are, if Miami realized that there were genuine zombies, they’d let you know – but not via Twitter. If you live in New York like me, you might want to invest in some bite-proof armor.

In the meantime, you may want to get yourself psyched up for the Zombocalypse by watching a trailer for World War Z, read up on the offerings of flesh in Zombie Tales from BOOM! Studios (or Blackest Night or Marvel Zombies

if you must have superheroes) hone your reflexes by playing Dead Rising, or coordinate your moves with friends by going outside to play a game of  Humans vs. Zombies. Because the Mayan calendar ends in 2012, and whose to say that isn’t because they may have predicted a massive zombie massacre? It’s good to be prepared.