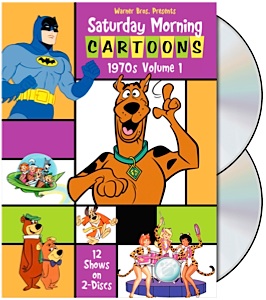 As the 1970s dawned, I was 12 and no longer as interested in Saturday morning fare. There was Little League which was either in the morning or afternoon and I found myself drifting more towards the [[[Bowery Boys]]] shorts that ran on channel 5 after the cartoons wore themselves out.  My younger siblings watched, but not with the same passion I had shown just a few years earlier.

, coming tomorrow from Warner Home Video, was more introductory than revisiting my childhood. Having just finished the 1960s volume, it was startling to see how rapidly things had changed. Spies and super-heroes were rapidly supplanted by large gaggles of people either playing music or solving mysteries or both. The disc opens with a cheat, an episode of [[[The Jetsons]]], which may have run in the 1970s for the umpteenth time, but was emblematic of an earlier era, stealing time from something more current.

The success of [[[The Partridge Family]]] in prime time and [[[The Archies]]] on Saturday mornings certainly explained by there was so much music, without a single top 40 tune to emerge from any of these groups.

The mysteries could be ascribed to the wildfire success of [[[Scooby Doo]]], the series that straddled the decades by being introduced in fall 1969 and becoming the most imitated series of the 1970s.

The stories were also vastly different. By 1970, concerns over violence seemed to have begun taming the stories so the level of danger was different. The villains tended to be stupider and more bumbling, prone to slapstick ways of taking themselves out than being subdued by the crime fighters.  Groups of teens were proving to find mysteries, stumbling across problems and then fumbling their way through the investigation until the culprit was exposed and then apprehended as much through dumb luck than effective law enforcement.

Scooby Doo, a series I never warmed to through the years, is represented here in an episode from The New Scooby-Doo Movies that guest-starred the Harlem Globetrotters, which had their series so it was a nice but of cross-promotion. The Globetrotters were at the height of their fame around this time and this was a fun brand extension even if none of the players actually did their own voices, leaving that to the likes of Scatman Crothers. In this case, there are too many people caught up in a fairly mediocre story concluding with the guest stars strutting their stuff on the court, doing things that only work in animation. That it needed a laugh track, cueing kids when to laugh speaks volumes of how unfunny this could get.

We are shown just how many imitators there were with episodes from [[[Goober and the Ghost Chasers]]] and [[[Funky Phantom]]] that also featured groups of teens and their pets solving cases. One thing that was never clear, even after watching these, is why these people were friends. Look at Fred and Daphne, the homecoming King and Queen, who in the real world would have nothing to do with Shaggy or Velma. We’re just presented them as an ensemble and the stories move forward. Goober and Funky Phantom are pale imitations with stock stories, stock characters and even overly familiar voice artists doing variations on their characters, especially the great Daws Butler recycling his Snagglepuss for the Phantom.

Other imitators were [[[Josie and the Pussycats]]] which came in 1970, just two years after The Archies. The music was certainly incidental to the story and this one had a vile Captain Nemo who played an organ coming to hate the pop stars and their music.

The one variation that was weird was [[[Amazing Chan and the Chan Clan]]] which was more a “how done it” than “who done it”. In a nice special feature, actor Jamie Farr talked about the series where he wrote three episodes and explained how the network insisted the Clan each had a distinct personality all had to have something to do and each case featured a song from the children’s band. Oddly entertaining with nice voice work from Keye Luke as the famed Chan.  It’s also interesting to note that a show with a predominantly Asian cast made it to Saturdays before any African-American series.

The Asian influence was also seen with [[[Hong Kong Phooey]]], where a dog working as a janitor at the local police station was also the feared martial arts pooch – reflecting the then hot genre of martial arts films. The animation is among the weakest offerings but had its moments.

An oddity was [[[Yogi’s Gang]]], a show that collected all of the Hanna-Barbera characters from the previous decade and put them on a flying ark. Each episode used different collections of characters, by Yogi, and had adventures. Based on the episode here, the story seems designed to shine the spotlight on each character to say their favorite line or do a character bit. The story, though, had a nifty twist ending which made it satisfying, especially compared with the rest of the stories collected here.

Perhaps the most original series on the two-disc set is [[[Roman Holidays]]] that tried to replicate [[[The Flintstones]]] formula in a Roman era setting. It was about a nuclear family and their exploits – it didn’t look like any of the competition and had some of the best writing, so it’s sad that it lasted a mere 13 episodes.

By the latter part of the decade, Scooby’s imitators were fading fast and CBS was ready to try heroes once more. While ABC was still running[[[Super Friends]]], there hadn’t been much in the way of heroic adventure but in 1977 they hired Filmation to bring back [[[Batman]]] and try their hand at [[[Tarzan]]]. The former featured Adam West and Burt Ward reprising their prime time roles and both needed better direction because they over-emphasized the phrases or sounded constipated rather than dramatic. With cartoon violence even further de-emphasized by this point, actually fighting the criminals was out so the cases were contrived so the Dynamic Duo could triumph over the likes of the Joker with their wits and equipment. They added Bat-Mite for comic relief and it didn’t work at all. Filmation’s animation recycled much of their earlier Bat-efforts and there isn’t much entertainment to be found. Tarzan, with nice design work from Bob Kline, tried to make Edgar Rice Burroughs’ world palatable to kids and it largely worked.

The final extra on the set is a short piece looking at how odd Funky Phantom was with modern day animation folk such as Paul Dini trying to figure out how and more importantly, why it got made.