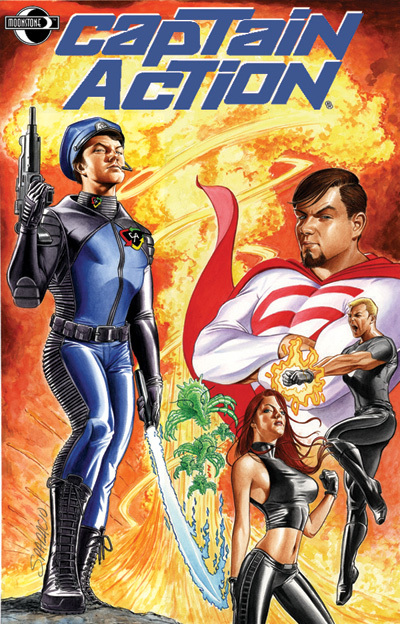 I know way too much about comics. Far more than is healthy. But there are, understandably, a few characters here and there that I either know very little about, either because I never really came across them or I did but found them terribly uninteresting and so dismissed them, soon forgetting what I had learned.

[[[Captain Action]]] happens to be such a character. I remembered he first appeared in the 1960s, wore a costume that resembled a futuristic police officer’s with a chest symbol that reminded me to recycle, and was based on an action figure. And that was it. I remembered nothing else. So when I was asked to review the first issue of the new Captain Action series, on sale today, I thought “Perfect. I can truly look at this as a first-time fan and objectively judge if this would be interesting to someone who has no previous knowledge of the character.”

I read it and found it to be a strange mix of too much information at once and not enough.

We begin with a [[[Superman]]]-like character called Savior. His narration explains who he is and reveals that he secretly blew up a place called A.C.T.I.O.N. Directorate. On page two, we find out that half of what we just read is a lie. This is not Savior, but a person disguised as Savior. This is our hero, Captain Action, who crashes into a statue of his father and proceeds to unleash a massive information dump on the readers in a very awkward monologue.

Apparently, there was once a hero called Captain Action (the original guy from the 1960s). The shape-shifter we’ve just met is his son, the new Captain Action, who has the ability to look like other people and copy their abilities, but only for a short time. Exactly how long he can disguise himself and how long afterward he has to wait before he mimics someone again is not made clear.

The new Captain Action wanted nothing to do with the life of a super-hero, despite his powers, but now feels forced to act since his father was killed by a group of super-heroes that an organization called A.C.T.I.O.N. had “created” to defend the Earth. What “created” means is not fully explained. The new Captain Action informs us that these heroes, Savior included, were somehow turned into sleeper agents, thus why they went rogue later. Exactly how they became sleeper agents is not explained, though a group called Red Crawl is blamed. Apparently, Red Crawl was defeated long ago and everyone believed they were dead, except for the original Captain Action. Now they’re back and causing trouble.

After defeating a hero called Green Circle (who is described as having god-like power but doesn’t even put up a fight), the new Captain Action explains the situation to his friends and we’re told this takes an hour. I wish we’d been there for that, as it probably would have cleared things up. 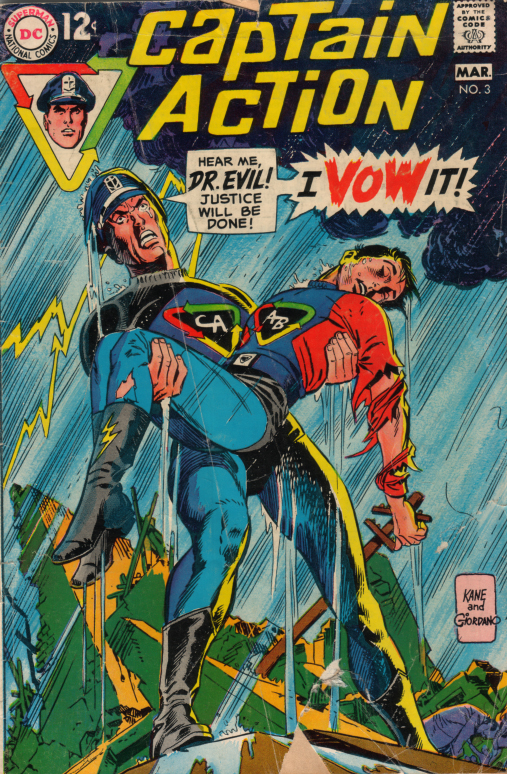 After realizing that the situation is desire and that Red Crawl now controls the Earth, but no one knows it, Captain Action and his colleagues go into a lab where we see a limbless man floating in a tank. They refer to him as Action Boy, and say that he was once Red Crawl’s greatest weapon but will now be their greatest liability. The new Captain Action also mentions he grew up thinking of Action Boy as “uncle.”

So, to review. A hero with mimicry abilities is out to save a world that’s already been conquered and is going to take down Earth’s super-heroes who have gone rogue.

Okay, that’s not a bad premise by itself, but so much of this story is not really explained. We’re tossed all this information about Red Crawl and sleeper agents and all but the details are missing. What is Red Crawl? What is its nature, its ultimate goal? They’ve taken over the world and no one knows it? What does that mean? How was this accomplished?

The original Captain Action is mentioned many times, but no information is given about his mission, his career, how long ago he died, whether or not he had powers. Did he die because of the sleeper agents? Action Boy was presumably his sidekick, but did he have any powers? He must have turned evil later, was it by mind control or by design? Why is he limbless and kept in a lab?

In fact, what the Hell is this “Valhalla Base” where we spend over half of the issue? It has a lab and offices, but what is it’s purpose? How is it connected to the A.C.T.I.O.N. Directorate? For that matter, what is A.C.T.I.O.N.? We aren’t told what it stands for, who it answers to or what its directive is. Are they responsible for all the super-humans on Earth in this fictional universe or are there other super-humans beyond their control? Where are they based? For all I know, this story could take place in either the American Mid-West, Canada or England. There’s no real way you can tell.

The new Captain Action is also not a great character. We don’t know enough about what’s going on in his head or in his heart to really connect to him. We’re not even told his real name (which is why I keep referring to father and son as “old Captain Action” and “new Captain Action”). Our new hero apparently disliked his father because the elder Captain Action was guilting him into using his abilities of mimicry to become a super-hero. Okay, except that we soon learn these powers are actually due to a device, they aren’t an innate ability. So why would the kid feel a responsibility to use the device? Was it more about the legacy of being a hero, with the original Captain Action just hoping his son would be a warrior like him? Why couldn’t Action Boy become the next Captain Action? It would be nice to know. It’s also hard to mourn the elder hero when we don’t even get to see him in flashback nor have any real idea about his career or influence. 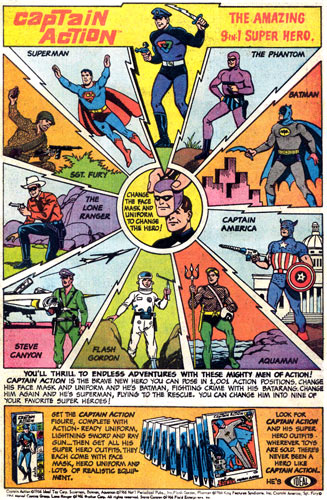 On top of all this, I have to say that the dialogue is mostly stiff and awkward. Captain Action’s whole info-dump would have been better as captions rather than him randomly talking to thin air for a couple of pages and then explaining the rest in his head. Even the sound effects are worthy of criticism. Some just don’t make sense. On one page, when Captain Action confronts Green Circle, he raises his fist and we see a WHOOMP sound effect next to him. Except he hasn’t hit the guy yet! So where’s that sound coming from? Did a horse die in the next room over?

I’m not saying everything should be given to the readers in issue 1. I enjoy teasing us with mystery and layers, allowing us to piece clues together over time. But this is not that. We are thrown a ton of information with no real detail or connection and then expected to follow along.

Now, at the beginning of the issue, there is an introduction by Jim Shooter, who plotted the original Captain Action comics in 1968, with fellow creators Wally Wood and Gil Kane. He explains that he was given the character, told that Captain Action had to have Shazam-like abilities, a sidekick named Action Boy, an Action Cave, a special car and a pet panther. He did a couple of issues and soon afterward the character’s title was canceled.

Shooter fails to mention that the character began as a G.I. JOE-esque action figure a year earlier. The action figure was said to by the “9-in-1” hero, having the ability to mimic other heroes. So you could essentially fit fake bodies over him and make him look like Superman, Batman, etc. When DC Comics licensed to do a series about him, they copied all the stuff from the toys (much as Marvel would do for characters such as the Transformers and G.I.JOE years later) but did not maintain the mimicry powers since they didn’t have the rights to some of the characters the guy could shift into (such as Captain America and the Lone Ranger). So they gave him a new power and also finally endowed him with a civilian name and an origin.

In the 1960s comic, Captain Action was said to be Clive Arno, an archeologist who discovered magical coins, each of which would give him the powers of a different mythological god. He and Action Boy would fight evil people such as Dr. Evil, who was actually Captain Action’s insane father-in-law (not kidding). The comic was revived in the 90s and no one seemed to care, so he went away again.

After learning this, I can appreciate the fact that Fabian Nicieza cleverly brought back the character’s ability to mimic other super-heroes. I can also appreciate that he made this a continuation rather than a reboot, with this character being the son of the original incarnation. But that doesn’t change the fact that as a first-time reader with no real knowledge of what came before, there was nothing in this comic that made me want to grab issue 2. Sorry guys.