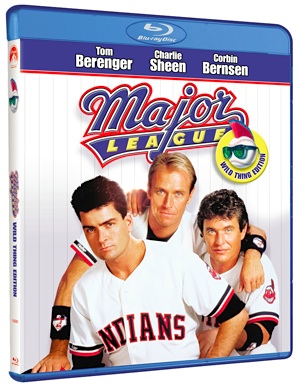 For whatever reason, baseball is the sport that translates best to film. Maybe it’s the team aspect, or the poetry of the game, but there are more movies about the sport than any other. On the other hand, baseball and other sports never seem to translate well to the comic form. Go figure.

Much like a super-hero’s career, the life of a baseball player is a finite one. Sooner or later, age robs the body of its speed or agility. Injuries become more frequent and then you play through the pain in the hopes of last a little bit longer in the activity you love. You watch, with envy, as youngsters with potential challenge you for playing time and then come gunning for your job.

Played straight, you get some great drama. Played with tongue-slightly-in-cheek, you can have an awful lot of fun. When Major League

opened in 1989, there hadn’t been a baseball film played for laughs in ages so the right film arrived at the right time. Since then, it has endured, one of those movies you find arresting as you channel surf. Forget the dumb sequels and recall what it was like to see the collection of misfits forged a bond to thwart the evil owner and go for the championship.

Now, currently, you can see professional teams really play like misfits (insert your Yankees jokes here) but the movie, unlike reality, makes us love these guys.

Tom Berenger is the emotional core of the movie, a guy hanging on
because he doesn’t know what else he can do despite the bumps and
bruises that have reduced his effectiveness behind the plate. He’s
accompanied by Corbin Bernsen’s egotistical third baseman who cares
more now about endorsement deals than handling the hot corner. And
there’s the religious pitcher Chelcie Ross, also hanging on despite age
slowing down his fastball. They’re mixed and matched with the speedy
infielder who can’t make contact with his bat, played by Wesley Snipes
and the near-sighted ex-con fireballer played by Charlie Sheen.
Wrangling them all with fatherly advice is James Gammon as the manager.

There’s more to life than the game, as Berenger has come to learn when
fate has him reconnect with his former lover, played by Rene Russo in
one of her earliest roles. She gives him a reason to keep going but
begin thinking about life off the diamond for the first time.

Everyone from the players to the owner (Rachel Phelps) to the
announcers (Bob Uecker and Skip Griparis) is a character and bring
something unique to the ensemble. The byplay in the locker room and on
the field is sharp, thanks to a script from director David S. Ward ([[[The Sting]]]).

The Blu-ray version of 2007’s Wild Thing Edition, going on sales
Tuesday, is a complete replication of that movie with no addition
extras tossed in. There’s the commentary from Ward and producer Chris
Chesser where we learn that Snipes isn’t a particular fast runner and
that the film was shot with Milwaukee doubling from Cleveland. My Kinda
Team (23 minutes) is a solid Making Of featurette with most of the cast
chiming in; A Major League Look at [[[Major League]]] is a short clip
as players on the ’06 Indians roster talked about their film
counterparts;  Bob Uecker: Just a Bit Outside is a nice profile of the
former player turned sportscaster; A Tour of Cerrano’s Locker is a mere
minute long and just filler; and, we get the usual assorts of photo
gallery and trailers. The alternate ending, the only deleted scene
offered, is a fun twist ending and it’s neat to see what might have
been.

So, you get a sharper picture and excellent sound which is probably not
enough to make you upgrade from a release a mere two years old. Of
course, if you don’t have the film, now might be the time to write it
onto your lineup card.