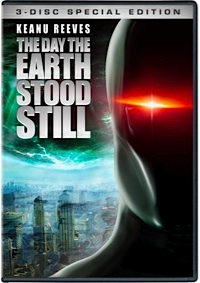 The Day The Earth Stood Still

While a little preachy, at least Klaatu had the chance to address the greatest scientific minds and issue his warning that mankind had to deal with their nuclear arsenals and avoid self-annihilation or it would be done for them.

In the remake, out today on DVD, Klaatu never gets to make the address. This is one of the most glaring failings in the film which starts off well and then falls apart in the final third.  The nuclear issue was turned to an ecological one, which is perfectly valid, but after that, characterization is avoided in favor of a plodding story.

Keanu Reeves is fine as the unearthly visitor and his lack of chemistry with Jennifer Connelly is appropriate. Jaden Smith, as her step-son, swings between cute and petulant, perfectly appropriate for his age but, whereas the first film focused on the world through the boy’s eyes and gave Klaatu a reason for hope; the relationship depicted here is thin.  At no point, does Klaatu get to see the world for himself, relying entirely on a brief conversation with one of his kind who has been on Earth the past seven decades.

The internal logic for the way Klaatu’s alien powers works seems entirely lacking while the nanites that comprise Gort make far more sense. The stylishly updated Gort works far better than Klaatu or his energy globe of a vessel.

The supporting cast is filled with fine actor who are given little or nothing to do and their wasted talent is a shame. John Cleese and Jon Hamm have more to do than Kathy Bates and all three deserved more screen time.

The scant special features include three brief deleted scenes that add nothing to the experience. There’s a featurette on how the “reimaging” happened along with a focus on the special effects going into Gort.  The final two, [[[Watching The Skies:  In Search Of Extraterrestrial Life]]], and [[[The Day The Earth Was “Green”]]] are pleasant viewing experiences but are nothing extraordinary. There’s also a still gallery and production photos.

The DVD is available in a variety of formats starting with the two-disc special edition that includes the original film. The three disc version has a digital copy (which is almost de rigueur for big budget releases these days). The Blu-ray edition, not reviewed, also has the original film and two extra features.